Stogursey Castle (grid reference ST 203 426) is tucked away to the south of the village of Stogursey. It is not mentioned in the Domesday Book of 1086, although the village is, but it is likely to be Norman in origin and was probably built in the late 11th or early 12th century by the de Courcey family.    It is a motte and bailey design with two baileys.  The castle was held for King John in 1215 and then he ordered the Prior of the Stogursey Priory to destroy it.  The Prior did not obey this order and this led to a further order being issued in 1228. This was also ignored because during Henry III's reign, Fawkes de Breaute held the castle through his wife, the daughter of Alice de Courcy. During Edward I's reign the castle passed to the possession of a local landowner, Sir Robert Fitzpane.  Stogursey Castle was finally burnt down by Lord Bouville in 1459 during the wars of the Roses.  It has been in ruins ever since then.

Parts of the curtain wall survive and are up to 6 metres high in places.  The ditch surrounding the motte is still filled with water supplied by a leat from the Stogursey Brook.  The only surviving building is the Gatehouse, which was a later addition. It was built up against the castle walls.  It was repaired in the 1870s and renovated and restored by the Landmark Trust in 1981-2.  They now rented out by them as self-catering holiday accommodation.  The outside of the gatehouse and castle remains can easily be seen from a public footpath. 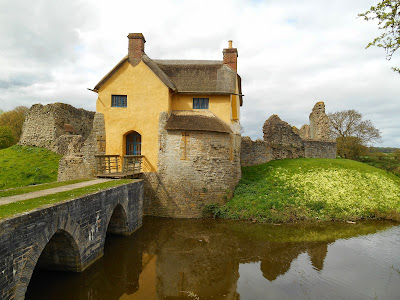 Stogursey Castle Gatehouse and 13th century causeway bridge over the moat.  The bank in front of the gatehouse was covered in primroses when I visited in April 2015 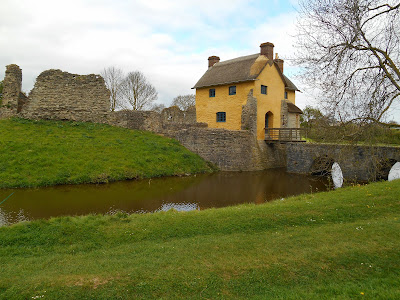