To celebrate British competitors' gold medal winning performances at the London Olympics and Paralympics in 2012 Royal Mail painted a post box in each of the gold medal winners' home towns.  The only gold post box in Somerset is located outside Trull Post Office on Church Road, Trull.  It commemorates the gold medal won by paralympian Deborah Criddle in the Team Dressage event.  She also won silver medals in the Individual and Freestyle events, all with the horse LJT Akilles.

Deborah Criddle competed in 4 Paralympics, beginning in Sydney in 2000.  She won 3 gold medals at the 2004 Athens Games in the Team, Individual and Freestyle Dressage events on the horse Figaro IX.  She was awarded an MBE in the 2013 New Year's Honours List.  She lost the use of her right arm and leg in a motorcycle accident in 1985.  Her arm was amputated in 2003.

Royal Mail painted 110 post boxes gold across the UK and a list of their locations can be found on this website:   http://www.goldpostboxes.com/ In November 2012 Royal Mail announced that the gold post boxes would remain gold permanently. 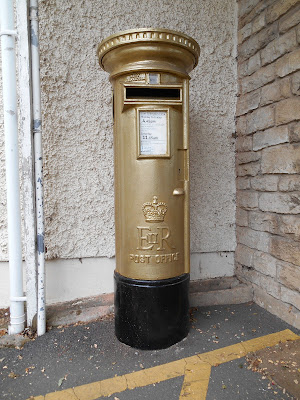 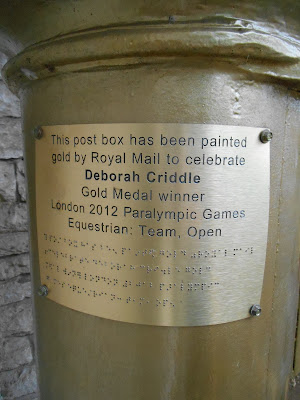