The Caratacus Stone is an early medieval inscribed stone, which is 1.2 metres high and leans slightly to one side.  It is located at the top of Winsford Hill (grid reference SS 889 336) on Exmoor and is about 100 metres away from the nearest parking place.  It is thought to date from the 6th century.  The inscription, which is very difficult to make out, is thought to say in Latin CARAACI NEPVS. However the first word may be CARANACI, CARATACI, CARANTACI or  CARAMACI.  Whatever the first spelling of the first word the meaning is thought to be grandson, kinsman or descendant of Caratacus.

Cunobelinus, who died around 40 AD, was the greatest king in Iron Age Britain. After his death his sons Caratacus and Togodumnus were dominant leaders among the Iron Age tribes in Southern England. They led resistance to the Romans, who invaded Britain in 43 AD.  Togodumnus was killed shortly after the invasion and Caratacus retreated to south Wales.  He ran a guerrilla campaign from there against the Romans for 7 years until 51 AD, when he retreated to central Wales.  He fought a battle with the Romans, possibly at Llanymynech near Oswestry, but was captured by them.  He escaped and fled to the Brigantes tribe in northern Britain.   However the Brigantian queen Cartimandua was allied to Rome and she and handed Caratacus over to the Romans.  He was taken to Rome where he successfully negotiated to save his life and that of his family. It is not known what happened to him after that.

A shelter was constructed around the stone in 1906 by Sir Thomas Acland.  The stone was removed in 1937 to see if there was a grave beneath it but none was found.  The stone was then replaced in its original position.

History of the Caratacus Stone, Winsford Hill by Alfred Vowles.  Published by the author in 1939 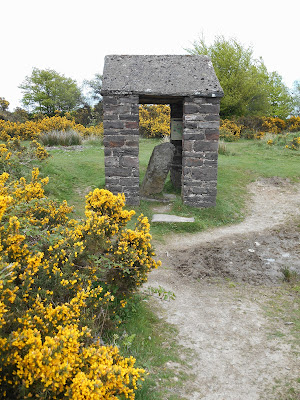 Caratacus Stone in its shelter and guarded by gorse bushes 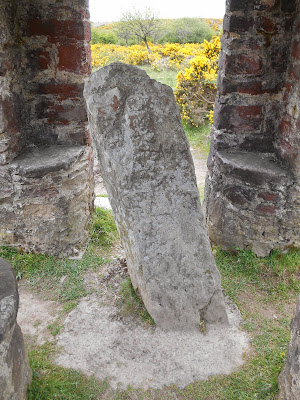