This stone marks the spot where Taunton's gallows once stood.  They were located at the boundary of the parishes of Bishops Hull, Trull and Wilton.  This was Taunton's execution site from 1575 until 1810.  The origin of the name Stonegallows is not certain.  It may have been named after a large boulder stone nearby.  Alternatively the uprights of the gallows may have been made of stone or it could have been named thus because it stood on a 'stoned' or main road.

In 1615 the parishioners of Bishops Hull were obliged to rebuild the gallows with timber supplied by the parish of Trull.  The first recorded execution at Stonegallows was of Peter Smethwick, Andrew Baker, Cyril Austen and Alice Walker who were executed for murdering and dismembering the curate of Old Cleeve on 24th July 1624.  Many others were executed here over the following centuries.  On 15th April 1801 nine men from various villages were hanged here for burglary and theft of sheep, cows, bread and wheat.  It is believed that there were two more hangings here: James Taylor in 1809 for shooting John Dyer and wounding another man.  The last hanging is thought to be that of 18 year old Thomas Gage, alias Tarr, in 1810 for murdering Elizabeth Stylings of Goathurst.  The gallows were probably removed in 1814 in response to public protests about them.

Taunton: An A-Z by Lionel Ward.  Published by Onyx Publishing in 2008 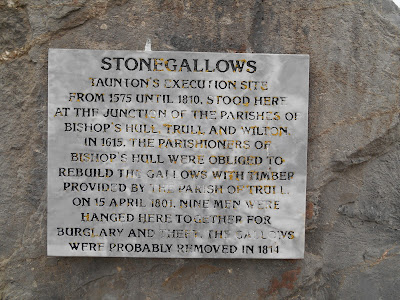 Plaque on the stone 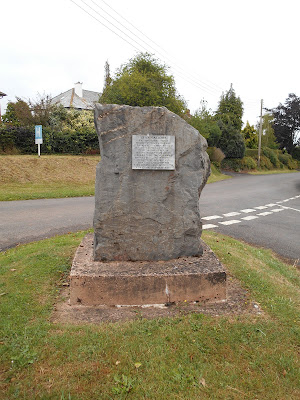 Stone marking the site of Taunton's gallows
Posted by St Kilda at 15:22