This statue of a wolf suckling Romulus and Remus, the founders of Rome, was made by an Italian prisoner of war called Gaetano Celestra. Some Italian prisoners of war worked on farms in this area towards the end of the Second World War.  Gaetano Celestra was an builder and stone mason and he and his fellow POWs were given the task of repairing the wall in this area, which had been damaged by a German bomb.  He was given permission to work on the statue with his colleagues in their spare time as a way of saying thank you to the local people for their kindness during their enforced stay in the area.  The statue, which is made of concrete over a wire frame and stands about 4 metres high, was erected in 1945 and was given listed status in 2008.  Gaetano Celestra stayed on in the area after the war.

The statue is located by the side of the busy A39 road 2 miles north east of Wells.  There is no pavement and the road is very busy during the day.  There is parking for several cars about 200 metres to the south west by the entrance to the service track that goes up to the Pen Hill Transmitter.  However at 6.30 am on a Bank Holiday Monday I was able to walk safely along the road to visit the statue and take a few photos.  My previous visit was in the pitch dark at about 7pm on a Sunday in March when the road was also quiet but the photos taken with a flash weren't great, so I decided to come back in daylight.  There is a rough grass verge on either side of the road that you could walk along.  The grid reference for the statue is ST 570 490.  It is on the east side of the road.  It is on private land but can clearly be seen from the road.

There is a plaque at the foot of the statue, which summarises the legend of Romulus and Remus thus:

"According to legend Romulus and Remus were the twin sons of Mars, the God of War, and vestal virgin Rhea Silvia. Amulius, the king, had the babies placed in a trough and cast into the River Tiber.  They drifted ashore and were rescued by a female wolf, who suckled, fed and protected them until Faustulus, a shepherd, and his wife found them and raised them into adulthood.  Romulus and Remus both had plans to build a city but had such a violent disagreement about who should be king that Romulus killed Remus.  Romulus built the city, which he ruled as king for forty years. 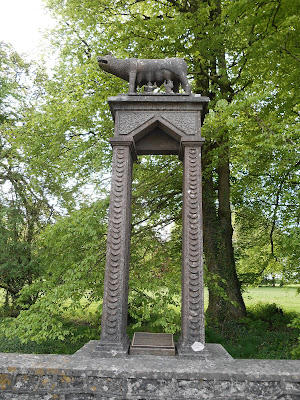 The wolf suckling Romulus and Remus 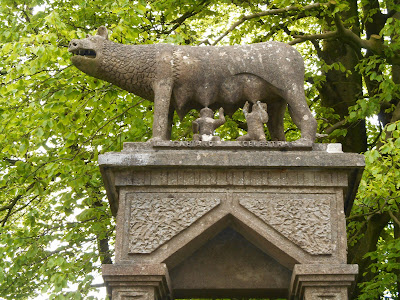 Close up of the wolf suckling Romulus and Remus 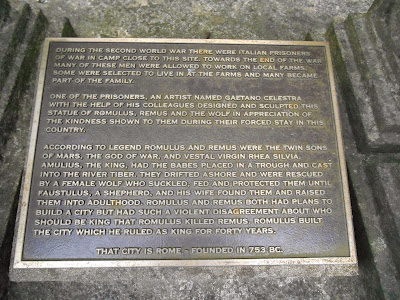 Plaque underneath the statue 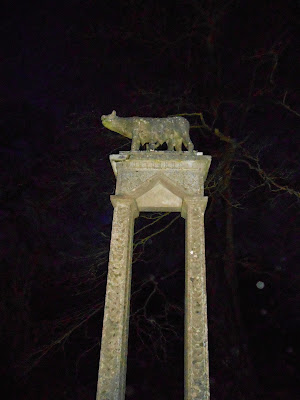