These two well-worn statues carved in local ham stone probably date from the 15th century and were originally built into the old Petherton Bridge.  The bridge was destroyed in 1645 during the English Civil War but the statues were built into the new bridge.  This bridge was destroyed in the 1970s when the A303 was widened.   The statues were mounted in their current position on the west side of the bridge.  Their protective surround was refurbished by the Highways Agency in 2009.

The origin of the statues is uncertain but one story is that they are a memorial to two children - a boy and a girl - of a wealthy local family who drowned in the River Parrett.  Another story is that they represent the couple who paid for the bridge to be built in the 15th century.

If you wish to view the statues, which are located at grid reference ST 451 167, there is a small parking place on the east side of the bridge, which can be accessed only from the eastbound carriageway of the A303.  However the parking area is located just before the start of a slip road off the main road and you will need to slow right down in order to enter it, so although you may be indicating to pull into the parking area the cars behind you are very likely to think that you are indicating to use the slip road to leave the A303.  During the summer you then have to walk about 100 metres through tall grass and nettles behind the crash barrier to cross the bridge.  There is a set of steps down to the statues on the west side of the bridge. 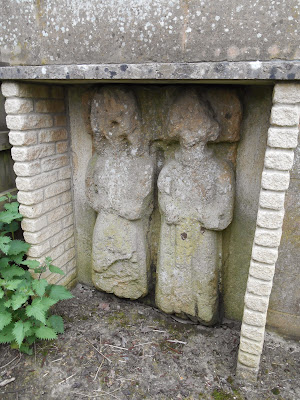 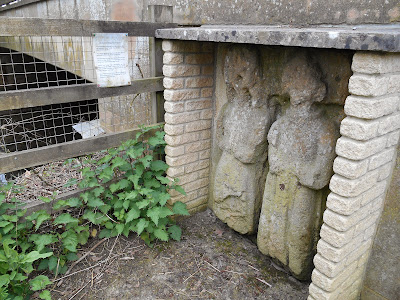 Petherton Bridge Statues in their shelter
Posted by St Kilda at 16:02