Alfred's Tower is located on the border between Somerset and Wiltshire at the top of a hill at an elevation of 261 metres above sea level.  It is 48 metres high and can be seen for miles around.  It has views over Somerset, Wiltshire and Dorset.  It was commissioned by Henry Hoare, creator of the magnificent landscaped gardens at nearby Stourhead in Wiltshire, in 1772 in honour of the achievements of King Alfred.  It is located close to where it is thought Alfred gathered local Wessex men together before fighting and defeating the Danish invaders at Edington in Wiltshire in 878 AD.

The Tower is triangular with circular turrets at each corner.  Between the turrets it is hollow and open to the sky.  There is a staircase in one of the turrets, which has 205 steps leading up to a viewing platform.  It is open to the public at weekends in the summer.

In 1944 an American Air Force plane crashed into the top of the Tower.  The 5 airmen were killed but the Tower survived, although it was damaged.  It was restored in 1986.  The Tower was given to the National Trust as part of the Stourhead Estate in 1946.

Alfred's Tower is the location for the start of the 28 mile long Leland Trail, which runs across Somerset to Ham Hill. 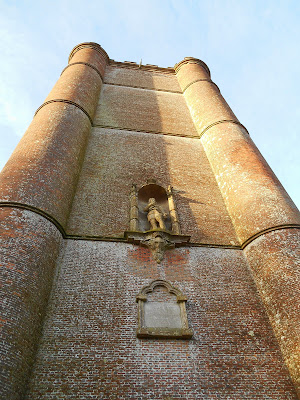 Statue of Alfred 9 metres up the tower.