Cothelstone Tower or Beacon (grid reference  ST 190 327) was probably erected on the top of Cothelstone Hill as a folly between 1768 and 1780 by Lady Hillsborough, who was the owner of the Cothelstone estate at the time,  However the date of its creation seems to be in doubt, with other sources saying it was built for Edward Esdaile who built Cothelstone House in c1817-20.  It was 9 metres high and built of rubble stone.  The tower was destroyed a few years before 1919 and all that remains to be seen today are some pieces of masonry on a mound.   The mound itself may be an ancient burial site.  A photo of the tower taken in about 1906 can be seen on the Francis Frith website:
http://www.francisfrith.com/cothelstone/cothelstone-beacon-tower-1906_55781

The lack of definitive information seems surprising for what must have been a prominent monument in the local landscape.   The location today is open access land but presumably was not always so accessible.  Cothelstone House (not to be confused with Cothelstone Manor, which is still standing) was demolished in 1962. 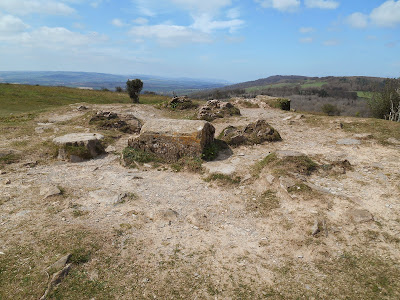 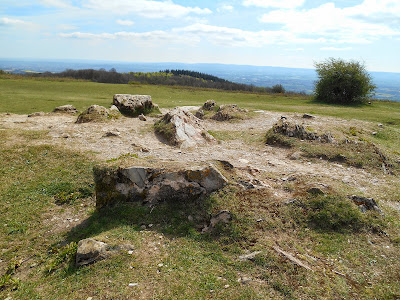 Somerset Follies by Jonathan Holt.  Published by Akeman Press in 2007
Posted by St Kilda at 14:00