The Bridgwater and Taunton Canal was constructed by engineer James Hollinsworth between 1824 and 1827.  It was extended into Bridgwater by engineer Thomas Maddicks 1839 to 41.The impressive Albert Street Cutting in Bridgwater has walls made of sandstone rubble, apart from a short section near West Street Bridge, which has been rebuilt with concrete blocks after a collapse in 1968. The horizontal and vertical timbers shown in the photo below were put in at this time to shore up the remaining walls. 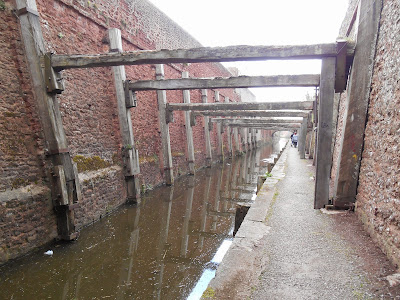 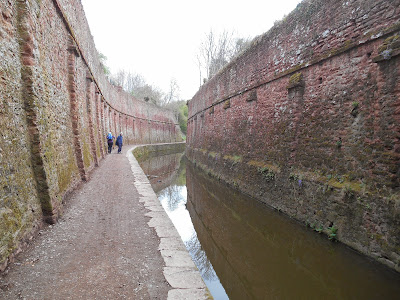 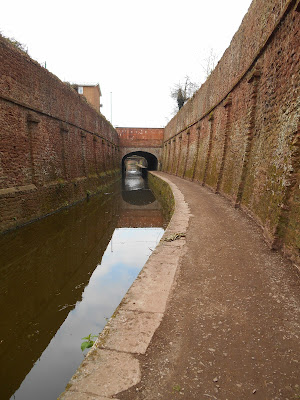 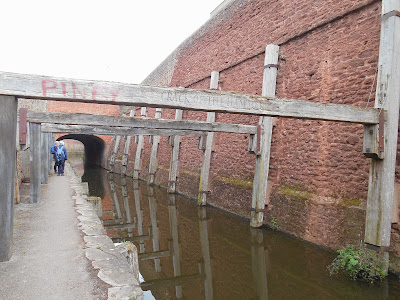 Each of the 12 horizontal  beams has a line from the poem below carved into it:

The Navigators poem was composed in 1996 by local people in conjunction with writer Tony Charles. It was commissioned for the opening of the River Parrett Trail. It recalls the skill and toil needed to dig the tunnel.  The poem was carved into the beams by letter cutter Andrew Whittle. More information about the poem can be found here:
http://www.publicartonline.org.uk/casestudies/environmental/river_parrett/description.php

By Waterway to Taunton: A History of the Bridgwater and Taunton Canal and the River Tone navigation by Tony Haskell.  Published by Somerset Books in 1994.

The Bridgwater and Taunton Canal by C.A. Buchanan. Published by Somerset Industrial Archaeological Society in 1984
Posted by St Kilda at 15:51