Joseph of Arimathea and Paradise, Burnham-on-Sea

According to legend, Joseph of Arimathea landed on the beach at a spot between what is now Burnham-on-Sea and Berrow on his way to Glastonbury.  He is said to have named the place where he landed Paradise. A metal plaque commemorating this event was originally located on the wall of the Horlicks/Paradise Dairy.  The dairy was demolished in 1990 and in March 2000 the plaque was re-erected on the back of a garage wall in a small garden with a bench on the corner of Shelley Drive and Berrow Road.  It was unveiled by Councillor Peter Clayton, who was the Deputy Mayor of Burnham-on-Sea at the time.

Joseph of Arimathea is mentioned in all four gospels in the New Testament.  He was a disciple of Jesus and asked Pilate for permission to bury Jesus's body after his crucifixion.  He also donated the rock tomb where Jesus's body lay for 3 days until his resurrection.  According to legend Joseph was a metal merchant and visited England to buy tin from Cornwall and lead from Somerset.  He is said to have been Jesus's great uncle and to have founded a church at Glastonbury.  He is also said to have brought Jesus with him to England when Jesus was a child.  He is also associated with the legend of the Holy Grail and the original Holy Thorn tree is reputed to have grown from his staff, which he planted in the ground at Glastonbury. 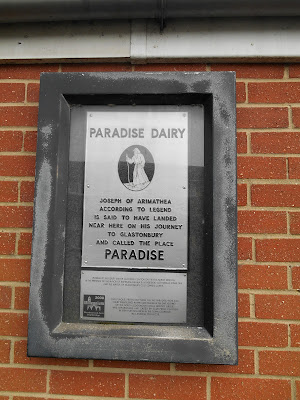 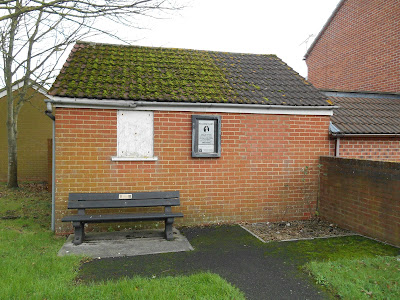 When I visited in December 2015 the garden looked in need of a bit of TLC and not much like how I imagine paradise to be!