A huge rusty metal shed a mile to the west of the village of Pawlett at the junction of Gaunts Road with Ham Lane is the most visible reminder of the Royal Aircraft Establishment camp, which was located there in the Second World War.  The shed was a hangar for a barrage balloon and there was a small camp adjacent it to house the people who worked there.

Pawlett was an outstation of RAE Farnborough.   The site was chosen because it was considered to be at low risk of German air attacks.  The main work carried out at Pawlett was into the testing of German and British barrage balloon cables and methods of cutting them using aircraft. Planes were flown into the cables of the Pawlett balloon from Exeter Airport and later Culmhead Airfield on the top of the Blackdown Hills.  RAE staff working in Exeter were housed in university accommodation and used the physics and chemistry laboratories there.

Barrage balloons were tethered by metal cables and their purpose was to defend strategic locations against attacks by enemy aircraft.  Aircraft were damaged or destroyed when they flew into the cables. The aircraft used in the experiments at Pawlett had various types of strengthened wing edges or cable cutters attached to them. Bomb testing was carried out on Pawlett Hams to the west of the hangar.

The hangar measures 100ft x 70ft x 80ft high and was erected c1940-41.  It was needed so that when balloons were being tested they did not need to be deflated each night. Balloons were filled with a mixture of air and hydrogen made at the gas works in Weston-super-Mare. The experimental work continued until 1944.  Today the balloon hangar stands unloved and rusting away.  You can't get right up to it, so these were the best photographs I could get.

The only other place to have hangars like the one at Pawlett was Sutton Coldfield Maintenance Unit where there were 4 similar hangars.  They have since been demolished. 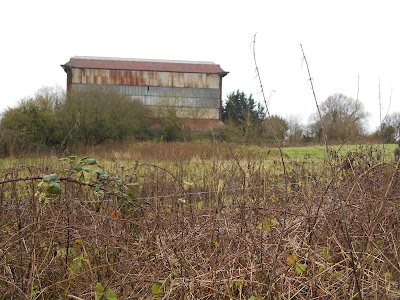 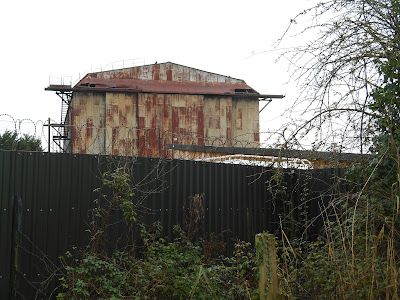 Front of the hangar 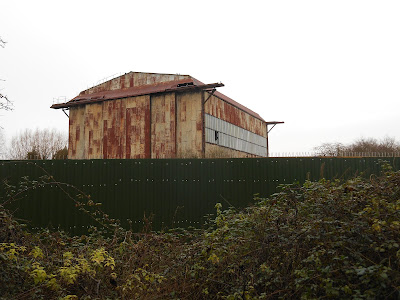 Front and side of the hangar