Francis Edward (Frank) Foley (1884–1958) was born on 24th November 1884 at 7 Walrow Terrace, Highbridge. He attended St Joseph's Roman Catholic School in Burnham-on-Sea and Stonyhurst College in Lancashire.  He later studied at St Joseph's College, a Roman Catholic seminary in Poitiers, France. After studying classics at Poitiers University he decided not to become a Catholic priest and in 1908, he began to travel around Europe. When the First World War began he was in Hamburg. He escaped to Britain disguised as a Prussian officer.  He took a commission in the Hertfordshire regiment and was later attached to the North Staffordshire regiment.  After being injured on the Western Front in 1917, Foley moved into military intelligence.

After the First World War Foley was recruited by the British Secret Intelligence Service (later known as MI6) to be their senior spy in Berlin. His cover job was passport control officer and this meant that he was responsible for issuing visas for anyone wanting to go to Britain or elsewhere in the British Empire. He married Katherine Eva Lee (1897–1979) in Dartmouth in 1921. Their daughter Ursula Margaret was born in Berlin in 1922.

When Hitler came to power in 1933 Foley dealt with a huge number of requests from Jews wanting to leave Germany to go to Palestine. He ignored the official rules governing the issuing of visas, thereby ensuring that 1,000s of Jews, who might otherwise have been sent to the death camps, were allowed to travel to Palestine or Britain. He went into the concentration camps such as Sachsenhausen to get Jews out, helped them obtain false papers, visas and passports and hid them in his own home, despite the risk to his own life.

Just before the Second World War began Foley left Berlin and was posted to Oslo. From there he co-ordinated the work of British agents in Germany. When Germany invaded Norway in April 1940, Foley was the only link between London and the Norwegian armed forces. He was awarded the knight's cross of St Olav by the King of Norway in 1943. In May 1940 he returned to Britain and was appointed commander in the Order of St Michael and St George for his work in Germany. He was allocated to interrogate Rudolf Hess, Hitler’s deputy, who had flown to Britain on a lone peace mission.

For the rest of the war Foley was in charge of the MI6 contribution to the double cross system: German spies who were caught attempting to gather intelligence on Britain were used to supply false information to the Germans.


Frank Foley retired in 1949 and moved to Stourbridge in Worcestershire.  He died of heart failure at his home, 32 Eveson Road, Norton, Stourbridge on 8th May 1958. He was buried at Stourbridge Borough Cemetery.

On 25th February 1999, Israel's Holocaust Memorial Centre,Yad Vashem, named Frank Foley Righteous Among the Nations, the highest award the Jewish people can grant to a person who is not Jewish.

In 2005 a statue of Frank Foley designed by Jonathan Sells was unveiled in Market Street, Highbridge. It was paid for by public fundraising.  A road in Burnham-on-Sea has also been named after him (The Frank Foley Parkway) and there is a plaque on the house where he was born.  A bronze plaque detailing his achievements was unveiled on Highbridge's war memorial in Southwell Gardens in 2000.  The bronze plaque was stolen in 2011 but replaced with a granite one in 2012.

There are also plaques honouring Frank Foley at the entrance to Mary Stevens Park in Stourbridge and at the Sternberg Centre in Finchley.

Frank Foley is still regarded as one of the most successful agents ever recruited by MI6.  It is believed that he saved the lives of about 10,000 people, although many of them were not aware of his identity. 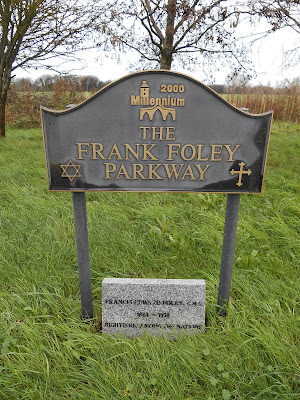 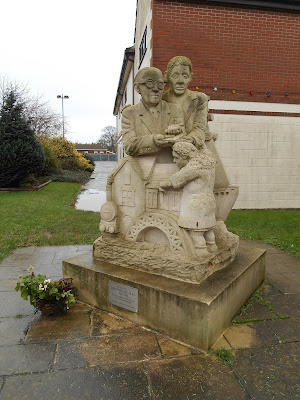 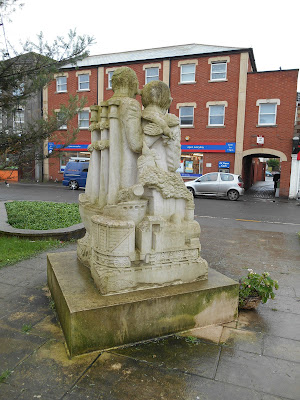 Frank Foley Statue, Highbridge
- the detail continues around the back 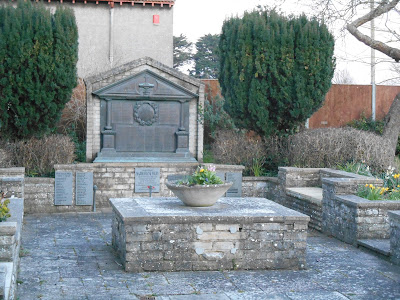 War Memorial in Southwell Gardens at Highbridge.
The original bronze plaque was stolen in 2011.  You can see the light area on the stone table where it was affixed.  It has been replaced by a granite plaque at the front of the war memorial.  However the war memorial garden was locked up when I visited in March 2016, so I couldn't get any closer.

7 Walrow Terrace, Highbridge, where Frank Foley was born.
A commemorative plaque is displayed above the front door. 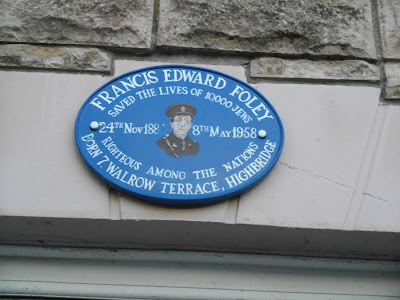 Plaque above the door of 7 Walrow Terrace, Highbridge