Cranmore Tower (grid reference ST 677 450) was built c1863-5 by William Witcombe of Leigh-on Mendip for John Moore Paget of Cranmore Hall as a prospect tower or folly. It was designed by Thomas Wyatt in an Italianate style and stands 45 metres high.  It is located on the top of a 280 metre high hill and is just over a mile to the north east of the village of Cranmore.

According to Derrick Warren in his book Curious Somerset there is a difference between a folly and a prospect tower: "A folly is an eccentric construction to be seen and commented upon as an object of curiosity or amusement, but seldom has any practical use.  A prospect tower, on the other hand, although its architecture can sometimes be eccentric, has a very practical use - it is to climb and then view the landscape from the top."

Cranmore tower can be seen from some distance away.  However because it is in the middle of a wood you don't appreciate just how tall it is until you get up close to it.  There is a small car park half a mile north north west of the tower just off an unclassified road about halfway between Waterlip and Chantry (grid reference ST 674 458).  The car park is not signposted from the road and is therefore difficult to find.  When we visited in August 2015 someone had helpfully hung some orange plastic ribbons in the trees on either side of the entrance.  Once you have found the car park there is a rough track through the woods, which leads to the tower.

Cranmore Tower is open to the public during the summer months and has a very lovely cafe.   On the day we visited there was a choice of over 10 cakes and bakes, all of which looked delicious and which are very reasonably priced. I had the coffee cake, which was very tasty.  We sat at the tables outside, as we had muddy boots on, having done a 9 mile circular walk around some of the local quarries and it was a warm sunny afternoon. There is also an indoor seating area.  The open hours are flexible but at weekends are generally 11am-6pm and on weekdays it generally opens at 2pm.  If you are making a special visit, it might be best to contact the owners to check it will be open.  This is their website:
http://www.cranmoretower.co.uk/
There is a charge of £2 for adults to go up the tower.  It is well worth it.

There are 184 steps to the top - I know because I counted them!  On a clear day from the top of the tower you can see 5 or 6 counties.  The day we visited it was sunny and clear but not as clear as it might sometimes be.  We could see the Bristol Channel in the distance as well as Glastonbury Tor, the Pen Hill Transmitter, Cley Hill near Warminster and Alfred's Tower at Stourhead.   There are 2 balconies - one just over half way up and one at the top.  Access is via an internal wooden staircase.

During the Second World War the tower was used by the Home Guard and the Royal Corps of Signals.  It was sold by the Paget family in 1984 to a local farmer called Donald Beaton.  He restored it but sold it in 1988 to Nick Ridge.  It has been owned by the present owners, who are members of the Baha'i faith, since 1992 and they have opened it to the public in 2007.  News items in the Western Daily Press, Daily Telegraph and The Times in spring 2015 said it was up for sale for £850,000.  The price includes an adjacent 3 bedroom cottage, a bunkhouse containing 2 dormitories and some woodland. 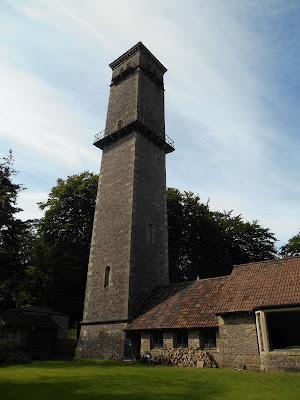 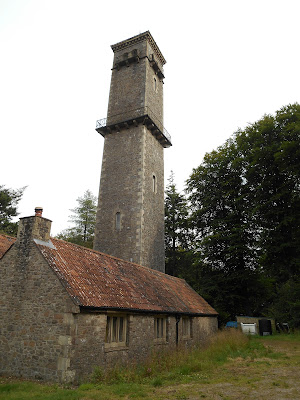 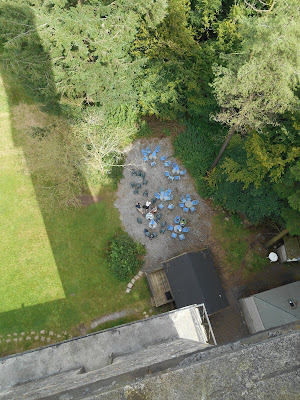 View of the cafe's outdoor seating area from the top of the tower.
The 3 members of our party who stayed down and looked after our rucksacks look very small 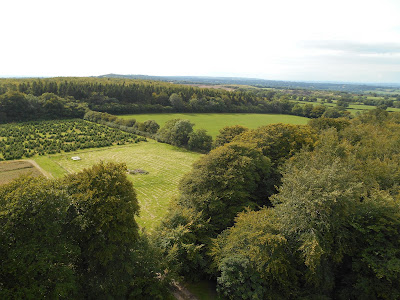 Looking north west from the top of Cranmore Tower 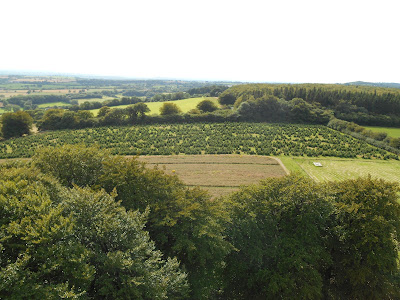 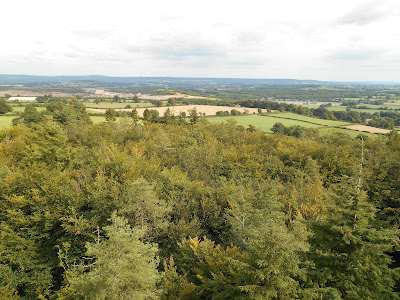 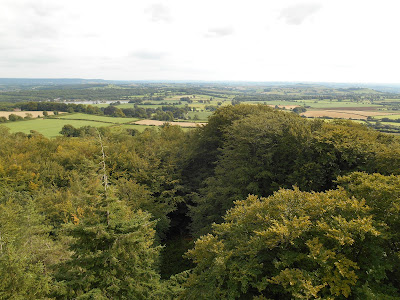 Looking south towards Alfred's Tower at Stourhead from the top of the tower
Posted by St Kilda at 15:06