As its name suggests, Porchester's Post is a tall wooden post.  It is located high up on Exmoor between Withypool Hill and Halscombe Allotment (grid reference SS 828 334).  The plaque on it reads as follows:

"First erected in 1796 to mark the boundary of the Carnarvon Estate.

Re-erected in memory of Lord Porchester, Earl of Carnarvon, the Chairman of the 1977 inquiry into the protection of moorland on Exmoor and to commemorate the Golden Jubilee of Queen Elizabeth II in 2002."

Pixton Park is a stately home half a mile to the south east of Dulverton.  It was built for the Acland family c1760 and altered internally c1820 and again in 1870. The Earls of Carnarvon acquired the house and estate from the Acland family by marriage in 1796.

In 1977 Henry Herbert, Lord Porchester (later the 7th Earl of Carnarvon) chaired a public inquiry, which examined the loss of moorland on Exmoor due to ploughing.  He proposed Moorland Conservation Orders, which would give the National Park Authority to power to prevent farmers from ploughing up moorland if voluntary agreements could not be reached.  Landowners would have received financial compensation.  However the Labour government's Countryside Bill of 1978, which included many of the recommendations of the Porchester Report, was not passed by the time of the 1979 General Election, which they lost to the Conservatives.  The Conservative government introduced their own legislation, which became the Wildlife and Countryside Act 1981. Under the terms of this act management agreements with financial compensation for farmers and landowners were to be voluntary. 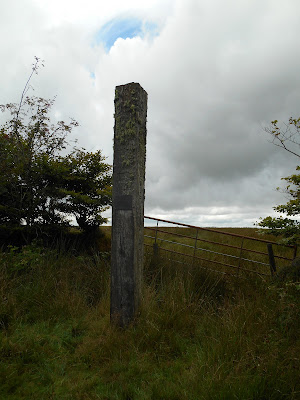 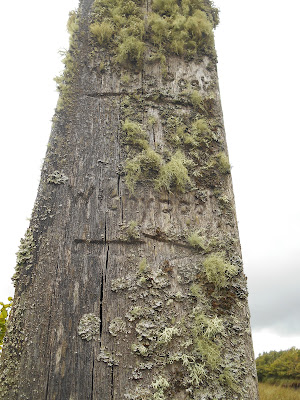 White Post to the Left, Withypool to the Right 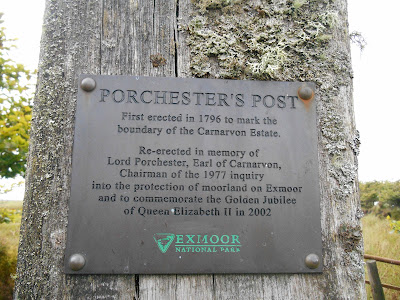 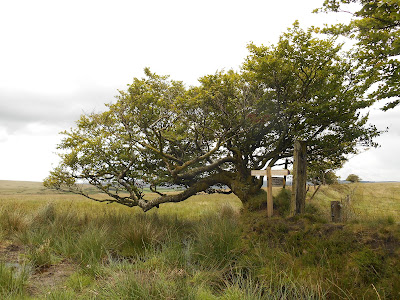 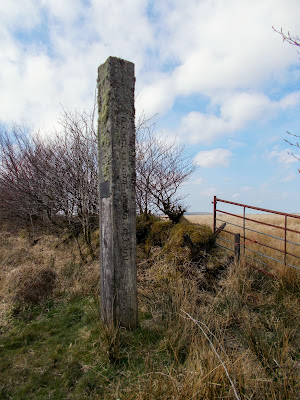 Porchester's Post on a sunny day
Posted by St Kilda at 14:59