In c1914 a mining engineer called John Berry realised that there were oil shales in the Jurassic Lower Lias rocks in the cliffs at Kilve. Oil had been extracted successfully from oil shales in Scotland since the 1850s.  An exploratory borehole was sunk at Kilve in 1921. This found oil shales at a depth of 91 metres and they continued to at least 168 metres.  It was later claimed that the oil bearing beds extended to a depth of 300 metres, covered an area of 8,000 acres and extended two miles inland.


A company called Shaline Ltd (spelt Shalime in some sources) was proposed in 1924 by a Scotsman, Dr William Forbes-Leslie.  He was also involved in the unsuccessful development of an oilfield at Setchey in West Norfolk in from 1918-1926.  He planned to build a crude oil works at Kilve, an 11 mile long light railway to connect Kilve with Bridgwater and an oil refinery and dock at Combwich.
An experimental plant was built at Kilve Pill in 1923 with one oil retort and an adjacent shed.  The shale used came from open cast quarries but the sulphur content was too high and the yield was only 5-10 gallons per ton.  The lower sulphur seams were much deeper and it wouldn’t have been cost effective to mine them, so the site at Kilve was abandoned.
Dr Forbes-Leslie was not the oil shale expert that he claimed to be and in London in 1935 he and two other men were convicted of conspiracy to obtain money under false pretences in a confidence trick involving a fictional trust fund.
The remains of the oil retort can still be seen at the north end of the car park at Kilve Pill.  A small tree is growing out of the chimney in a shape reminiscent of smoke. (Grid reference ST 144 443). 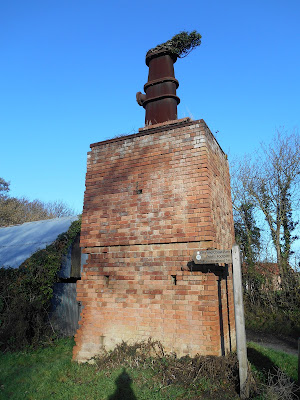 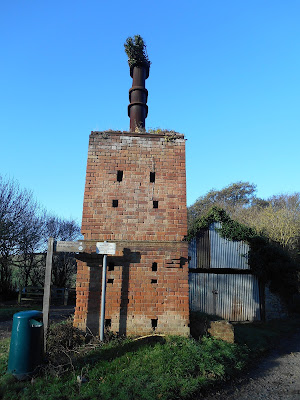 Oil Retort and associated iron shed at Kilve
Posted by St Kilda at 13:27