When sea levels rose after the end of the last Ice Age around 10,000 years ago, and before the Somerset Levels were drained in the Middle Ages, the area around the present village of Meare was an island of slightly higher land surrounded by marshes. Three miles north west of Glastonbury and to the north of Meare village was a large lake.  In Saxon times it was called Ferramere or Ferlingmere but it later became known as Meare Pool.

The monks of Glastonbury Abbey, who owned large areas of the Somerset Levels, drained large parts of them in the Middle Ages to use for livestock grazing and crops.  In the mid-13th century they diverted the courses of the Rivers Brue, Hartlake and Sheppey to flow into Meare Pool, which improved the drainage of the area around Glastonbury and increased the size of Meare Pool.


Meare Pool now had a circumference of 4 miles in winter (but less in summer) and provided the monks with a year round supply of fresh fish (including pike, tench, roach and eels) and swans, which were eaten by royalty and nobles on special occasions.
Adam de Sodbury, Abbot of Glastonbury Abbey, had a manor house built at Meare in the 1330s for the monks to use as a relaxing and contemplative summer residence.  The manor house was surrounded by herb and fruit gardens, a vineyard and orchards.

Abbot Adam also built a church close to the Manor House and a smaller house on the southern edge of the Meare Pool to house the chief fisherman or water bailiff, which became known as the Fish House.  There were 3 rooms on the ground floor: a hall, a parlour and a service room (used for food storage, preparation and serving). There was also a latrine on the west side, which was linked to the parlour.   The first floor, which was reached by an external staircase on the south side of the building, had two chambers and a latrine. There were three small ponds outside the Fish House, which were used as live-tanks for keeping fish caught in the lake, and a boat house.


Glastonbury Abbey was dissolved in 1539 and Meare Pool was drained between the late 16th century and 1718.  The Fish House was then used for various agricultural purposes for several centuries until it caught fire in the 1880s and the interior and roof were destroyed.  It was subsequently repaired and re-roofed by the Ministry of Works in 1912 and 1955.  In 2002 major repair work was carried out on the Fish House, which is now cared for by English Heritage.  The external staircase and the latrine were demolished at some point in the past and the floor of the upper storey has not been replaced. It is the only surviving monastic fishery building in England.

The Fish House, which now stands in a meadow close to the south bank of the River Brue, is kept locked but the key can be obtained from Manor House Farm next to the Fish House.    In the summer months the field in which the Fish House stands is grazed by cattle and for this reason dogs are not allowed to visit.  When I visited in August 2017 at first the cows ignored me but then they all started to run towards me and I ran for the gate.  I decided I would come back in the winter when the cows will most likely not be there and borrow the key to have a look at the interior.  I think they were just curious but I wasn't taking any chances. 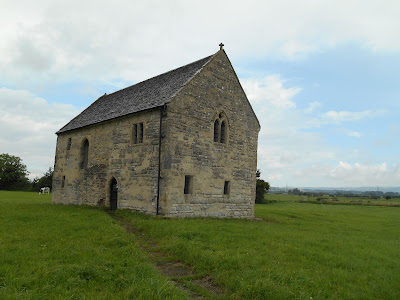 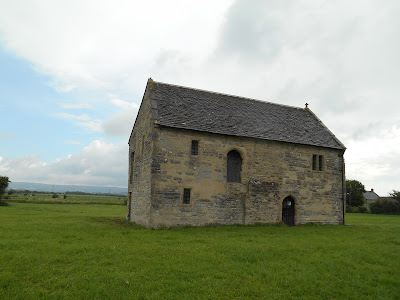 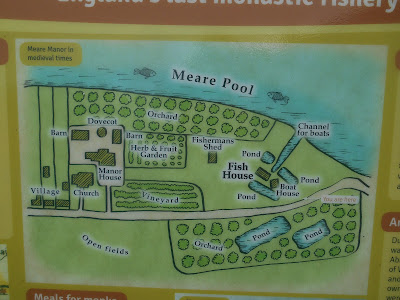 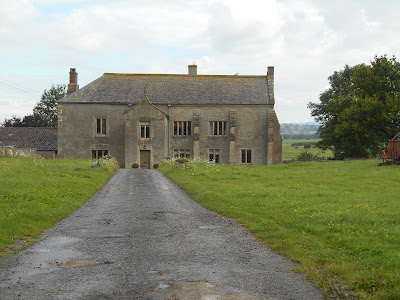 Manor House with Adam de Sodbury's Statue over the porch 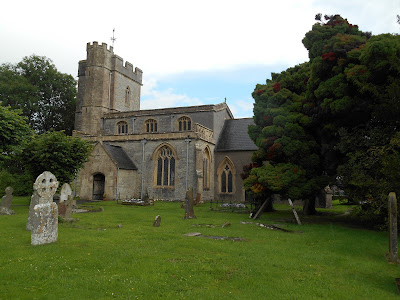 St Mary and All Saints Church, Meare
Posted by St Kilda at 14:38