At the eastern end of Somerset Wildlife Trust's Green Down Nature Reserve and half a mile to the west of the village of Charlton Mackrell there is a Powder House.  This was built to store gunpowder and lamp oil during the construction of the railway, which is located 200 metres to the south.  The railway line from Castle Cary to Cogload Junction to the east of Taunton was built between 1903 and 1906.  In order to build the section between Charlton Mackrell and Langport a succession of cuttings and embankments and a tunnel to the west of Somerton had to be constructed.

The Powder House fell into a state of disrepair but was restored by Somerset Wildlife Trust with the help of grants from the Heritage Lottery Fund and South Somerset District Council.  It has two rooms.  The main one is accessed via a porch.  The building was built with dressed local lias stone and red brick.  A similar store was constructed at Monday's Court Lane near Long Sutton to the south of the Somerton Tunnel.  This one also still exists, although apparently not in such a good state of repair.

Green Down Nature Reserve, which has been managed by Somerset Wildlife Trust since 1989, is a stronghold of the re-introduced large blue butterflies.  Other relatively rare butterflies which can be seen on the reserve include the dark green fritillary, brown argus and brown hairstreak.  Badgers, weasels, green woodpeckers, lesser whitethroats and nightingales live around the site, which is grazed by Dorset sheep and North Devon cattle.  A number of different types of orchid can be found on the 14 acre reserve, including bee, greater butterfly and autumn ladies tresses.

The quickest route to get to the Powder House from a public road is up the steep Sug Hill Track from the unclassified road that runs from the B3153 to the north east of Somerton to the hamlet of West Charlton.  There is parking for one car by the side of the road near the start of the bridleway up the hill.  It is only a walk of 300 metres from there, although it is all up hill.  Grid reference: ST 521 287 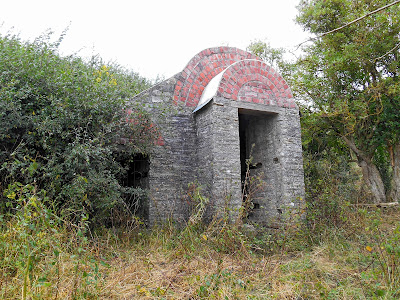 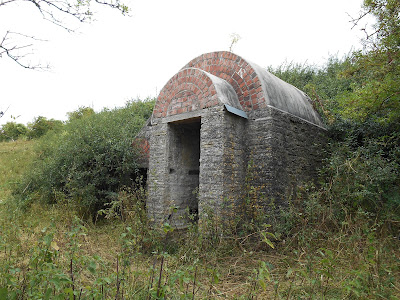 Main Entrance to the Green Down Powder House
Posted by St Kilda at 14:14