One evening in October 2001 George Caton was using a mechanical digger to create a new access road behind Mill Farm at Lopen near Ilminster for the Osborne family when he noticed some coloured cubes of stones.   He stopped work and the next day he and the Osbornes dug down and uncovered a small section of a Romano-British mosaic floor.  They contacted Somerset County Council's archaeological team and over the next three weeks the mosaic was fully excavated, cleaned, recorded and then covered over again to protect it from the elements.

An 8 roomed villa was revealed, which is thought to date from about 360AD.  The site is just over 1 km south of the Fosse Way, which runs from Lincoln to Exeter.  The mosaic is believed to be the work of the Saltire School, who were based at Corinium (now Cirencester).  The designs used in the mosaic included large squares, saltires, a dolphin, a cantharus (two handled cup), flowers, fish, heart shaped leaves and guilloche (plaits or braids).  The southern part of the mosaic is almost 7 metres square, while the northern section is 4.5 metres square.

The loose tesserae, which were found in the soil around the mosaic were donated to the village by the land owners and used to recreate a section of the mosaic.  Volunteers washed and sorted the pieces and Nicholas Durnan and Gina Wright placed the 3,000 or so pieces into lime mortar to create a cantharus.  It was completed in 2002 and is now on display on the floor of All Saints Church in Lopen.  The surround is made from Ham Stone. 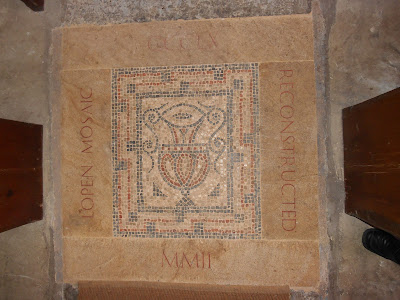 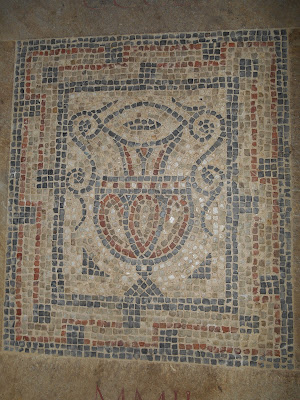