Most but not all of the following seats are in memory of an individual or a group of people.  As I come across them, I will add more photos to this post. 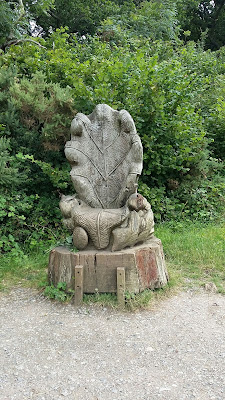 Oak Leaf Seat in Combe Hollow near Compton Dundon
A plaque on the rear of this oak leaf seat says "This seat has been sculpted in memory of Anthony Clothier, a forester of great vision who enjoyed managing woodland for future generations to enjoy.  Sponsored by friends and members of the Royal Forestry Society.
Grid reference ST 500 329. 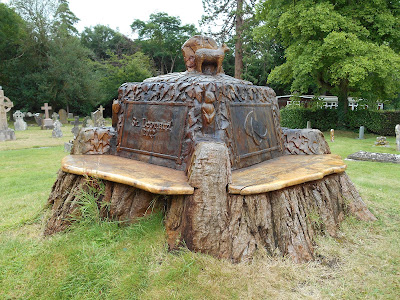 St Leonard's Churchyard, Butleigh
This seat in the graveyard of St Leonard's Church at Butleigh is one of my favourites.  The base is a fallen or felled coniferous tree, which must have been very tall, judging by its considerable girth.  The back of each seat has a carving on it:
There are carved animals at each of the four corners:
On the top of the seat are two sheep, one seated and one standing 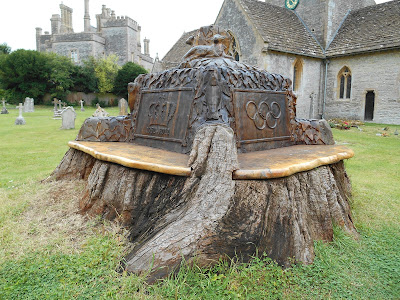 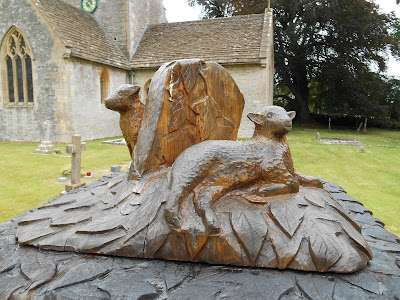 Two lambs on the top of  Butleigh Church's seat 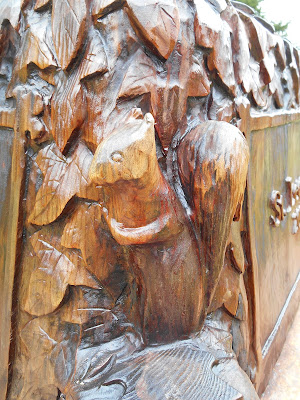 Wind and Weather Hut, Selworthy
The Memorial Hut on Selworthy Beacon (grid reference SS 915 476) is also sometimes known as the Wind and Weather Hut.  It is a stone built shelter, erected in 1878 and built as a memorial to Sir Thomas Dyke Acland 10th Baronet (1787-1871) by his youngest son, John Barton Arundel Acland of Holnicote, New Zealand. 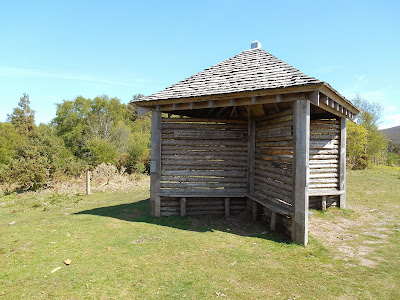 Jubilee Hut, Webber's Post
The original hut was constructed to commemorate Queen Victoria's Diamond Jubilee in 1897. It is designed so that whatever way the wind is blowing, there should always be a sheltered side. 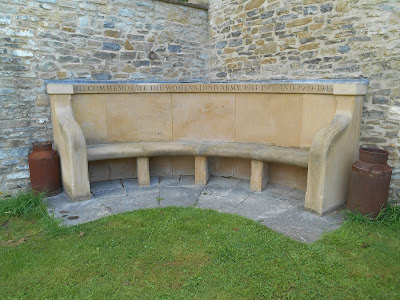 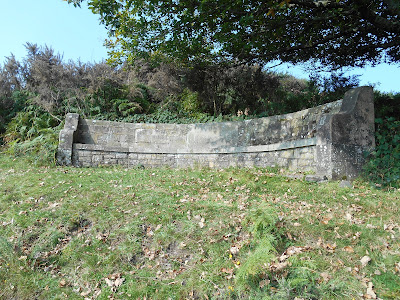 Pentley Seat, Ley Hill above Horner
The seat was erected by his wife in honour of Charles Thomas Dyke Acland 12th Baronet, who died in 1919.  The Acland family owned the Holnicote Estate, which included the Ley Hill from the mid-18th century until 1944 when it was donated to the National Trust by Sir Richard Dyke Acland, 15th Baronet. 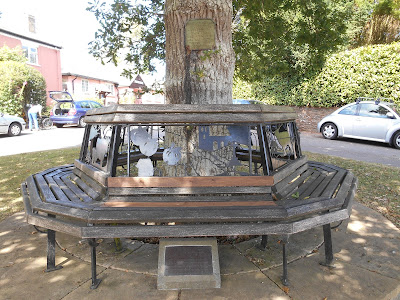 Kingston St Mary's Millennium Seat
The panels on the hexagonal seat on the village's small green depict the history of Kingston St Mary, including the wool trade, which provided money to build the church, general farming, the Kingston Black cider apple, Quantock wildlife and the future as envisaged by local school children. 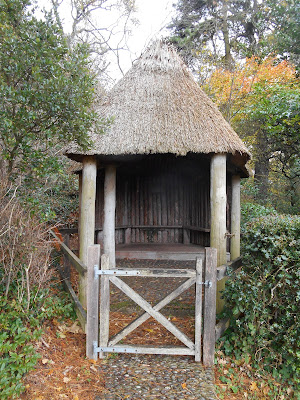 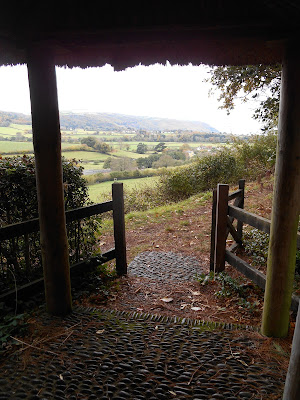 View across the Vale of Porlock from the Mitcham Seat
Lady Lydia Hoare married Thomas Dyke Acland (the 10th Baronet), whose family owned the Holnicote Estate, in 1808.  She grew up in Mitcham in Surrey where there was a similar seat.  This one is located on a permissive path between Allerford and Selworthy (grid reference SS 910 467).  Lydia and Thomas had 10 children. 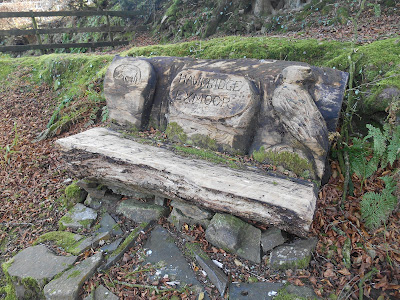 Carved wooden seat at Hawkridge on Exmoor
There is a large buzzard? on the right hand side and a small red deer stag on the left. 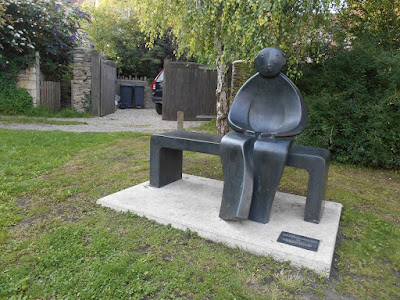 Man on the Bench, Bruton
This bronze sculpture was designed by Giles Penny and installed close to the packhorse bridge in Bruton in June 2015.  Apparently it cost £22,000 and gets very hot in the summer when the sun shines, so if you choose to sit down on it on a hot day, beware! 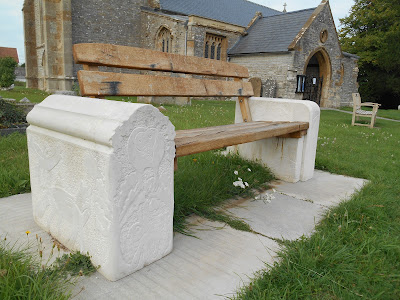 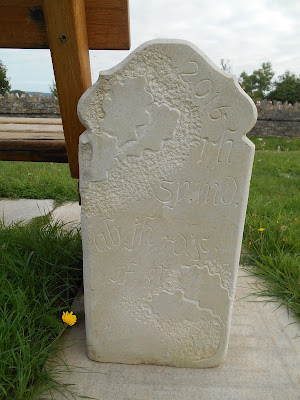 Date and initials on the Middlezoy seat

This seat with carved stone ends is located in the churchyard of Holy Cross Church in Middlezoy.  Judging by the date and initials on the back it was made by more than one person in 2016.  It is decorated with various wild animals, including a bat, a fox, a rabbit, an owl, a hedgehog and various birds. 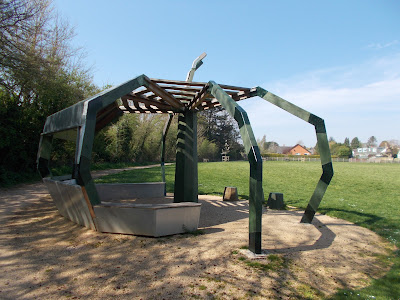 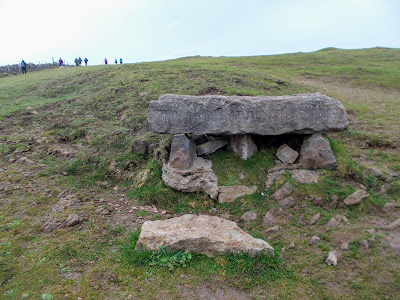 Stone seat on Wavering Down
This stone seat has the words "Only a hill but all of life to me" carved into the front of it.  This is a quotation from a poem by Geoffrey Winthrop Young (1876-1958), who was a British climber, poet, educator and author.  The rest of the poem is as follows:

Only a hill: earth set a little higher above the face of Earth: a larger view of little fields and roads: a little nigher to clouds and silence: what is that to you? Only a hill; but all of life to me,
up there between the sunset and the sea.
Posted by St Kilda at 15:12