This handsome late 17th century triumphal arch was originally built at Low Ham Manor. Low Ham Manor was an over ambitious project, which was never completed.  It was started in 1688 by John, Lord Stawell but work on it probably stopped after his death in 1692.  What had been built of the house fell down sometime after 1779.

The arch was originally two separate arches when it was at Low Ham.  When it was moved to its current location in 1873-4 on the High Street in Sparkford, the two arches were rebuilt back to back to act as a gateway to Hazelgrove House, which belonged to the Mildmay family.  However when the Sparkford Bypass was built it was cut off from Hazelgrove House and is now a gateway to nowhere.

The arch was built of grey lias and faced with ham stone. 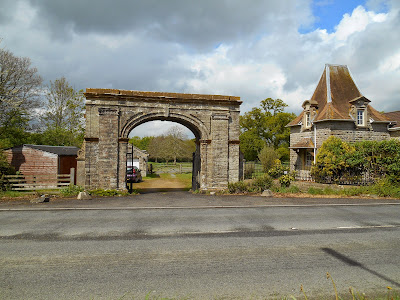