Batcombe Hollow is a dry valley on the south west facing slope of the Mendip Hills near the village of Draycott. The underlying geology is Dolomitic Conglomerate, which was formed during the Triassic Period 251 to 200 million years ago. It was deposited in steep-sided desert canyons, known as wadis, and on steep mountain slopes.  It is a coarse-grained rock, which consists of boulders and smaller fragments of Carboniferous Limestone, which are bound together with finer-grained sediment. The Dolomitic Conglomerate is known locally as Draycott Marble and was quarried in the Draycott and East Horrington areas for building stone.  Even after a wet winter and the day after torrential rains there was still no water running down the valley.

Because the limestone of the Mendip Hills doesn't hold water well, man made dew ponds were dug to provide livestock with a drinking water supply all year round.  The idea was that they filled up with rainwater.  There is a round dew pond at the top of Batcombe Hollow, which is thought to be a post medieval cattle pond.  It is concave and lined with closely packed lias stone blocks.  Just above it is a small standing stone, which is thought to be modern in origin. It is 1.8 metres tall and 50 cm deep. 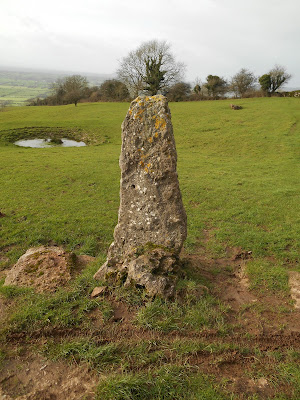 Standing stone and round dew pond

Further down the hill is a larger standing stone of Dolomitic Conglomerate, which is also thought to date from the 1980s or perhaps even more recently.  It is 1 metres tall by 1 metre wide and 35 cm. I haven't been able to find out who erected the 2 standing stones or why they did so. 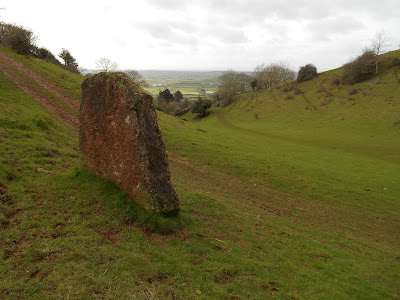 There is a larger rectangular pond at the bottom of Batcombe Bottom but I can't find out anything about it.  It doesn't have an entry in the Somerset Historic Environment Record. 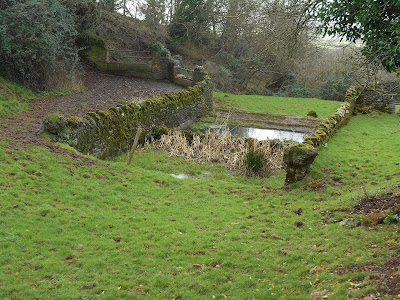 Even further down the hill near Batcombe Farm there is a "sheep creep". These are square or rectangular openings built into the lower parts of dry stone walls to allow sheep but not cattle to pass through them.  I have seen them in the Peak District and in Yorkshire but this is the first one I have noticed in the Mendip Hills. 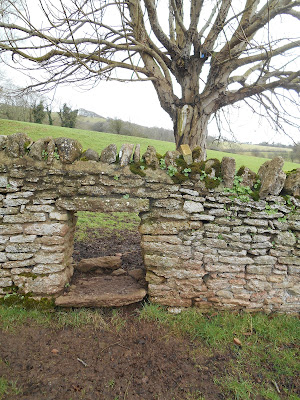 Batcombe Hollow is on the route of the West Mendip Way.  It is much less well known than its famous neighbour Cheddar Gorge and indeed it is much less dramatic.  However it is a delightful tranquil spot and I doubt it is every crowded with people even on a hot day in the summer.
Posted by St Kilda at 13:37