Margaret Grace Bondfield, trade unionist, campaigner for women's rights, politician and the UK's first female cabinet minister was born on 17th March 1873 in Chard.  Her father William was a laceworker and she had 10 siblings.  She attended the nonconformist British School in Chard and became a pupil teacher there at the age of 13.

At the age of 14 she became a shop assistant in Brighton and then from 1894 in London. Appalled by the long hours, poor pay and the requirement to 'live in' she joined the newly formed National Union of Shop Assistants, Warehousemen and Clerks (NUSAWC).  Using the pseudonym Grace Dare she wrote articles for the union's journal Shop Assistant. In 1896 Margaret went undercover for the Women's Industrial Council (WIC) and worked in several West End shops to covertly gather information for WIC to enable them to campaign for shop work reform.  She presented her evidence in the Economic Journal in 1899, at a House of Lords select committee in 1901 and before a 1908 parliamentary departmental committee.

In 1898 Margaret was appointed Assistant Secretary of the NUSAWC, a post she held until 1908. She also joined the Independent Labour Party, became a leader of the Adult Suffrage Society and sat on the executive of the Women's Trade Union League (WTUL). In 1906 she and Mary Macarthur jointly founded the first women's general union, the National Federation of Women Workers (NFWW).  In the same year she helped to found the Women's Labour League (WLL). After 1908 she did more investigative work for WIC on the employment of married women, maternity and child welfare.  Her work contributed greatly to the introduction of state maternity benefit and improved medical care for mothers and babies from 1914.  She helped Mary Macarthur to organise and protect women who were employed in war work during the First World War.  In 1915 Margaret became the organising secretary of the NFWW.

In 1918 the WLL and WTUL were absorbed into the women's sections of the Labour Party and Trades Union Congress.  In the same year the NFWW merged with the National Union of General and Municipal Workers (NUGMW) and Margaret was appointed their chief women's officer after the death of Mary Macarthur.

Margaret Bondfield was the leading woman trade unionist in the 1920s and she was the first woman to be elected to the TUC's executive in 1918.  She became the first female chairman of the General Council of the TUC in 1923.  She was elected as an MP in 1923 to represent Northampton and she was one of the first 3 female Labour MPs.  When the first Labour government was formed in 1924 she became the UK's first female minister, as parliamentary secretary to the Minister of Labour.  She was not re-elected in 1924 but was successful in a by-election at Wallsend in 1926.  After the Labour Party won the 1929 general election she was appointed Minister of Labour, thus becoming the UK's first woman cabinet minister and privy councillor.

However she lost her seat at the 1931 General Election and failed to be re-elected for Wallsend in 1935. She returned to her post at the NUGMW and remained there until her retirement in 1938. During the Second World War she co-ordinated voluntary services.  She was granted the freedom of Chard in 1930 and was appointed a Companion of Honour in 1948.

Margaret was known as Maggie to her friends. She never married and she died at her home in Sanderstead in Surrey on 16th June 1953. She is commemorated in Chard by a plaque on the Town Hall and she is also mentioned on a plaque at the location on the corner of High Street and Helliers Road where the British School used to stand. 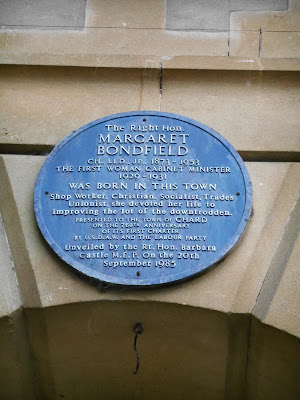 Plaque on the Town Hall commemorating Margaret Bondfield, which was unveiled by the Right Honourable Barbara Castle on 20th September 1985 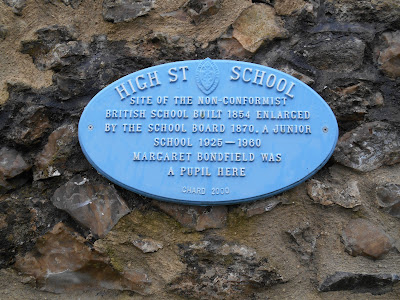 Plaque at the location of the British School in Chard
Posted by St Kilda at 15:15