A thatched hurdle stack stands on Priddy Green.  It is a symbolic collection of wooden hurdles that were used to form the sheep pens at Priddy Sheep Fair up until just after the Second World War.  After this time metal hurdles were used.  The hurdle stack was rebuilt a couple of times after the hurdles rotted. It was rebuilt in 1997 but was burnt down in an arson attack in April 2013.  It was rebuilt in July 2013.  It contains 130 ash hurdles.  It was previously thatched with straw but is currently thatched with reed, which lasts longer.

Priddy Sheep Fair was moved from Wells to Priddy in 1348 during the Black Death.  Presumably either the good people of Wells didn't want it back or no one has told them that the Black Death hasn't been a problem for several centuries!  No fair was held during 2001 (foot and mouth), 2007, 2012 (endless rain), 2014 (health and safety requirements and the cost of road closures) or 2015 (the organising committee resigned). 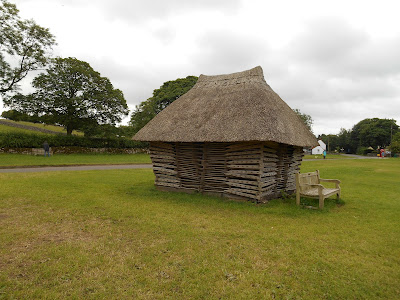 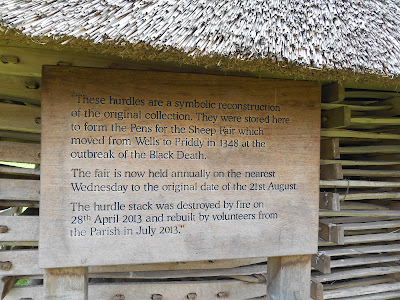 The plaque on the hurdle stack reads:

"These hurdles are a symbolic reconstruction of the original collection.  They were stored here to form the Pens for the Sheep Fair, which moved from Wells to Priddy in 1348 at the outbreak of the Black Death.

The fair is now held annually on the nearest Wednesday to the original date of the 21st August.