11 or 12 year old Mary Bridge was living with her family in Westonzoyland in July 1685 at the time of the defeat of the Duke of Monmouth at the Battle of Sedgemoor.  After the battle a Royalist officer was billeted with them.  When he attempted to rape her mother, Mary drew the soldier's sword and killed him with it by stabbing him in the heart.  She was tried in front of Colonel Kirke but was acquitted.  He gave her the sword to keep and it was handed down the generations before being given to the Museum of Somerset. 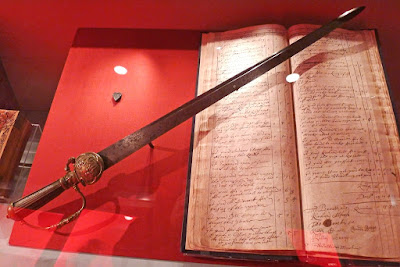 Mary Bridge's Sword on display at the Museum of Somerset
Posted by St Kilda at 15:34