On 19th May 1680 Mrs Herring, the wife of a farm labourer in Isle Brewers, gave birth to conjoined twins.  They were joined together back to back from their nipples to their navels (xiphopagus) but were otherwise healthy.

On 29th May 1680 the twins were baptised by the Reverend Andrew Paschall, who was the vicar of Chedzoy and they were named Priscilla and Aquila.  The vicar was superstitious and considered the twins' birth to be a sign of impending evil: he thought he had been proved right when the Duke of Monmouth invaded England in 1685.

Later in 1680 a man in the Taunton area wrote a pamphlet or 'broadside' about the birth of the twins.  This was printed and sold in London.  Hundreds of people visited Isle Brewers to see Priscilla and Aquila.  A commemorative plate made of yellow glazed red pitcher clay and decorated using the sgraffito technique was produced, probably in Crock Street, Ilminster.  The plate was probably sold to some of the people who visited the twins.  One of the plates can be seen on display in the Rebellion section of the Museum of Somerset in Taunton. 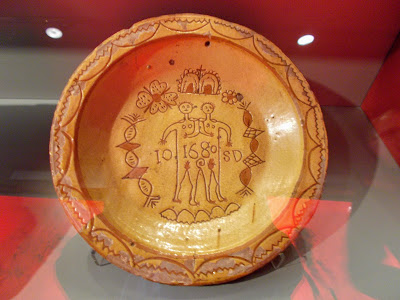 Commemorative plate on display in the Museum of Somerset

Henry Walrond lived at Walrond Hall near Isle Brewers and was a local Justice of the Peace.  He persecuted the local Quakers but was in financial difficulties.  Together with Sir Edward Phelips of Montacute House he abducted Priscilla and Aquila from their parents, so he could make money for himself by exhibiting them.  The twins probably died in about 1683. It is not known whether they died of natural causes or mistreatment.

Conjoined twins known as the Fair Maids of Foscott are commemorated in the Church of St Philip and St James in Norton St Philip.  They were apparently born (the date is unknown) in the hamlet of Foscott/Foscote (now called Foxcote).  They had two heads but only one pair of legs (dicephalus).  They lived into adulthood but nothing else is known about them.  In 1668 Samuel Pepys visited the church in Norton St Philip and commented on the tombstone of the twins. 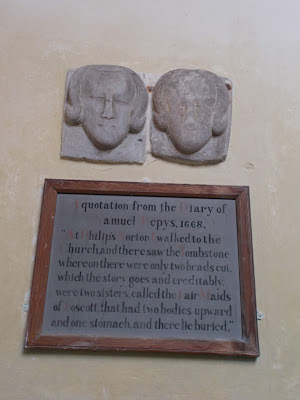 Stone effigies of the Fair Maids of Foscott in the church at Norton St Philip with the quotation from Samuel Pepys' Diary underneath
Posted by St Kilda at 15:20