Shamble is a medieval term for "a table or stall for the sale of meat" (Oxford English Dictionary).  The word comes from the Latin word scamellum, meaning "bench".  In the 14th and 15th centuries most country towns would have had shambles.  The most famous Shambles are in York: this was where the city's butchers lived and sold their meat in the Middle Ages.  When open markets declined, as shops became more common in the 19th century, the shambles in almost all towns were dismantled.

At the east end of the Market Place in Shepton Mallet stands a restored and re-erected bay of the town's 15th century shambles.  They are made of oak and have a pantiled roof.  The shambles originally stood along the north and south sides of the market place and were separated from the adjacent houses by a 10-15 feet wide gangway.  The shambles on the south side were demolished in the early 19th century but those on the north side survived until 1919. 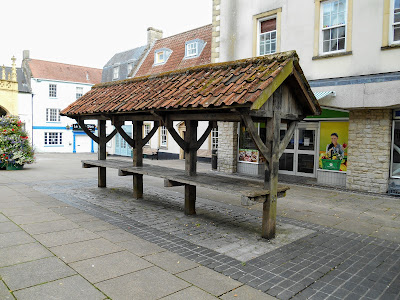