St Dunstan was born in Baltonsborough c909 AD.  His parents were Heorstan and Cynethryth. He was educated at Glastonbury Abbey and then joined the household of his uncle Athelm, who was Archbishop of Canterbury.  He later joined the court of King Athelstan but was expelled from it in 935 after being accused of practising black magic.

Dunstan took monastic vows, was ordained as a priest by Elphege the Bishop of Winchester and then returned to Glastonbury where he lived as a hermit where he painted,  embroidered and made things out of metal.  In 939 Edmund became King of Wessex and Dunstan was recalled to court.  Edmund made him Abbot of Glastonbury in c943.  Dunstan encouraged the restoration and increase of Benedictine monasticism in England.

King Edmund was murdered in 946 and was succeeded by his younger brother Eadred.  Dunstan had a privileged place in the royal court as one of the king's advisors.

When Eadred died in 955 Eadwig became King and Dunstan's enemies forced him into exile at Ghent in modern day Belgium where he studied continental monasticism.

Dunstan was recalled to England by King Edgar and made Bishop of Worcester in 957, Bishop of London in 959 and Archbishop of Canterbury in 960.  He restructured and reformed many abbeys and the Church in England.  Edgar died in 975 and was succeeded by his son Edward but he was murdered in 978.  Edward's brother Ethelred became king but by this time Dunstan was getting old and he retired to Canterbury where he continued to preach and teach up until his death.

Dunstan died on 19th May 988 and his feast day is 19th May for this reason.  He was buried in Canterbury.  He was made a saint soon after his death and was greatly venerated. 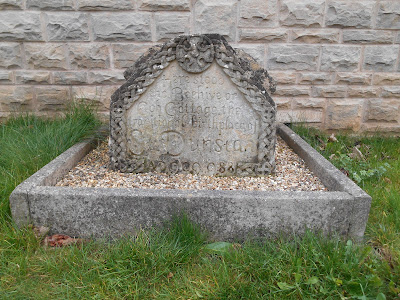 Stone marking the place where Dunstan was born in Ham Street, Baltonsborough 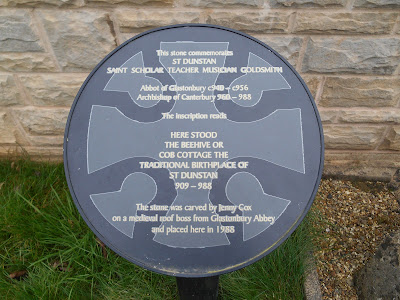 "Here stood the beehive or cob cottage, the traditional birthplace of St Dunstan 909-988
This stone was carved by Jenny Cox on a medieval roof boss from Glastonbury Abbey and placed here in 1988" 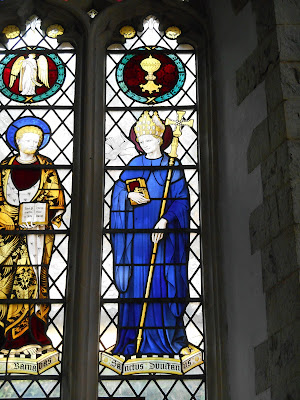 Stained glass of St Dunstan in All Saints Church, Selworthy 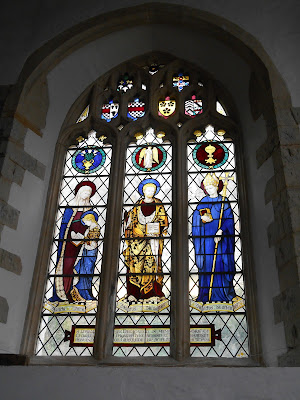