Selworthy Cross isn't easy to find, despite being no more than 300 metres from the car park at the end of the road near Selworthy Beacon. It is not well signposted from the car park or from other directions and neither is it marked on the Ordnance Survey Landranger or Explorer maps.  The grid reference is SS 908 475.

The cross is a simple but large wooden cross. There is a stone bench with a few verses from Psalm 148 inscribed on it in front of the cross.  The cross was erected in memory of Thomas Dyke Acland (1809-1896), the 11th Baronet.  He was an MP and an educational reformer and his family owned the Holnicote Estate, which includes the village of Selworthy, Bossington Hill and Selworthy Beacon.  He died at Killerton House near Exeter (another estate owned by the Acland family and their main home) and is buried at Columbjohn Chapel on that estate.  Both estates were given to the National Trust in 1944.

The cross was until recently almost surrounded by trees but an area in front of the cross has now been cleared, so the view from the cross has improved.  The quotation on the back of the stone bench is written in Latin but an English translation has been provided on a wooden board located between the bench and the cross.  This is what it says:

"Praise God from the earth: dragons and all the depths
Fire, hail, ice, snow, storm winds that obey his word.
Mountains and all hills: orchards and every cedar
Wild beasts and all cattle: serpents and winged birds
Praise the name of God because his name alone is exalted
His praise is above heaven and earth." 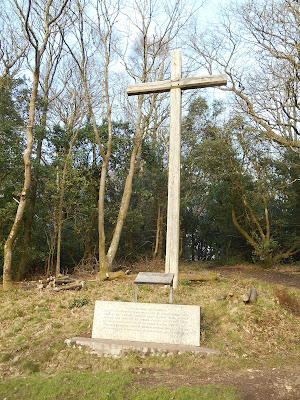 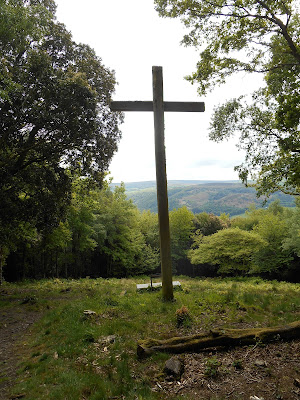 The View over Exmoor from Selworthy Cross 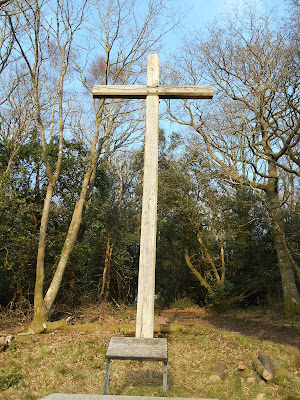 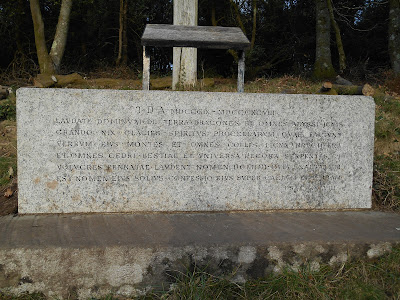 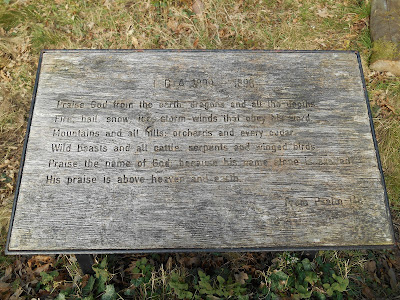 English Translation of Part of Psalm 148 Small signpost to Selworthy Cross at a crossroads in Lynch Combe
This sign is very easy to miss.  There is another larger one nearby but that it is half a mile from the Cross and there are no more signs at the next two junctions of footpaths and tracks.
Posted by St Kilda at 15:01