Vice Admiral Sir Samuel Hood was born on 27th November 1762.  He joined the Navy in 1776 on the Courageux with his first cousin once removed, who confusingly was also called Samuel Hood (later Lord Hood). He was then moved first to the Robust and then the Lively.  He was promoted to the rank of Lieutenant in 1780 and took part in action in the West Indies 1781-2 on the Barfleur . He lived in France for 2 years c1783-4.  He then surveyed the coast and harbours in the Halifax (Nova Scotia not Yorkshire!) area from 1785-88 on board the Weasel.  In 1788 he was given the command of the frigate Thisbe, on which he sailed back to Britain.  He commanded the ship Juno in Jamaica from 1790-91.  While in Jamaica he rescued three men from a sinking ship in a violent storm.

French Revolutionary Wars 1792-1802
In 1793 Hood sailed to the Mediterranean on Juno.  He was involved in several operations and transferred to the L'Aigle and then Zealous in 1796.  Zealous was one of the ships that accompanied Nelson on his disastrous attack on Santa Cruz de Tenerife.  Zealous played an important role in the battle of Abu Qir Bay against the French in 1798 and defended Salerno in 1799.  Hood then served on the Courageux and the Venerable. In 1802 Hood was sent to Trinidad.

Napoleonic Wars 1803-1815
1803-4 Hood and the army together captured the islands of St Lucia and Tobago from the French and several territories on the mainland of South America (now in Guyana and Surinam) from the Dutch.  He also captured or destroyed a large number of enemy ships.  In 1804 Samuel Hood married Mary Elizabeth Frederica Mackenzie, daughter of the governor of Barbados.

In 1805 while fighting the French off Rochefort his right elbow was smashed by a musket ball and his arm had to be amputated.  He became MP for Bridport in 1807 and held the seat until 1812.  He returned to sea in 1807 on board Centaur and in the same year he was promoted to rear admiral of the blue.  He was in command of the naval force which captured Madeira in December 1807. In 1808 he served in the Baltic against the Russians and was promoted to the rank of rear admiral of the white.  In 1809 he was second in command at Corunna during the re-embarkation of the army and he was created a baronet later the same year.   He became rear admiral of the red in 1810 and vice admiral of the blue in 1811. He served in the Mediterranean for two years until he was appointed commander in chief in the East Indies.  He arrived in the East Indies in mid 1812.  In January 1814 he was appointed vice admiral of the white.

Samuel Hood died at Madras on Christmas Eve 1814 of malaria. He had no children, so his baronetcy passed to the son of his brother Alexander.  Alexander was himself a captain in the Royal Navy.

The Hood Monument, which was designed in 1831 by the Bath architect Henry Edmund Goodridge to commemorate the life and achievements of Vice Admiral Sir Samuel Hood, is a Doric column built in local ham stone. There is an inscription on 3 sides of the base.  At the top are laurel wreaths underneath a naval crown.  On this are 4 galleons interspersed with mainsails.  It isn't clear whether Vice Admiral Sir Samuel Hood was born in Butleigh or in Dorset but his wider family lived in the village for several generations and Sir Samuel's great uncle, also Samuel Hood, was Vicar of Butleigh.  His brother Alexander, who died on active service with the Royal Navy in 1798, is buried in Butleigh Churchyard 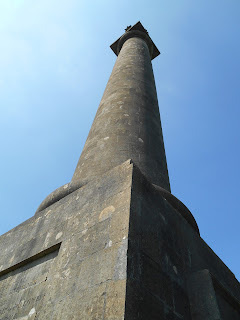 View from the bottom of the Hood Monument 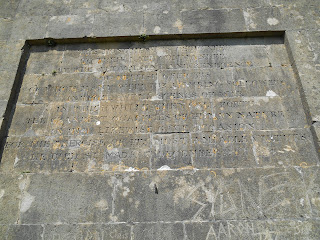 The inscription reads: "This monument is dedicated to the late Commander by the attachment and reverence of British officers of whom many were his admiring followers in these awful scenes of war in which while they call forth the grandest Qualities of human nature in him likewise gave occasion for the exercise of its most amiable virtues. He died at Madras, December 24th 1814." 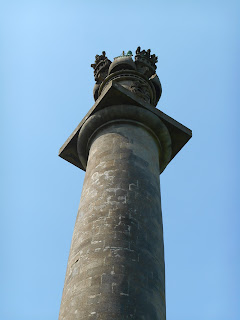 Top of the column - decorated with ships 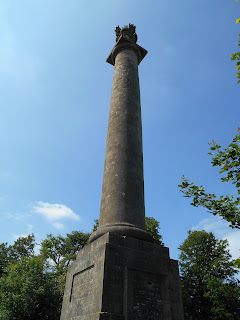 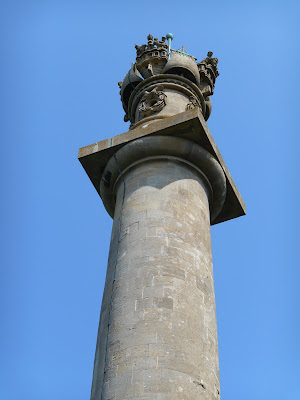 Sailing ships at the top of the column 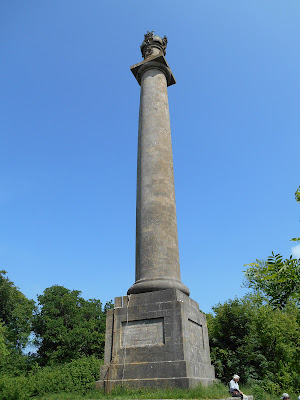 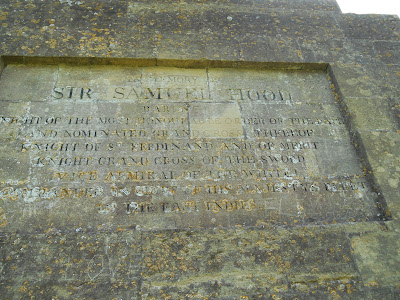 The inscription reads "In Memory Sir Samuel Hood Baronet, Knight of the Most Honourable Order of the Bath and nominated Grand Cross thereof. Knight of St Ferdinand and of Merit, Knight Grand Cross of the Sword, Vice Admiral of the White and Commander in Chief of His Majesty's Fleet in the East Indies."
Posted by St Kilda at 15:47