Hungerford Colston (what a wonderful name!) was out shooting with a group of his friends in Great Breach Wood/New Hill Wood near the village of Butleigh on October 30th 1852 when he was accidentally shot and killed by one of them.  Hungerford Colston was the only son of the Rev William Colston, Rector of West Lydford from 1797 until his death in 1855. A memorial obelisk was erected to Hungerford at the place where he was shot.  The inscription on it reads:

"Here fell mortally wounded by the accidental discharge of a gun whilst shooting with some friends 30th October 1852 Hungerford Colston DCL only son of William Hungerford Colston DD Rector of West Lydford.  This obelisk is erected by his only sister."

A report of an inquest into Hungerford Colston's death was covered by The Times newspaper on November 8th 1852.  He was accidentally shot in the knee by Mr Tudway, who was the MP for Wells, and who had just shot a woodcock and was looking for the dead bird.  He did not die immediately but was taken to a nearby house where his leg was amputated by a Mr W.E. Miller of Castle Cary.  Hungerford died of blood loss during the operation. Before he did so he absolved Mr Tudway of any blame.  The verdict of the inquest was "accidental death".

According to the West Lydford parish register Hungerford Colston's full name was William Hungerford Morris Colston.  He was baptised at St Mary's Church in West Lydford in 1817 and was buried there on 5th November 1852 aged 34.

The memorial is deep in the wood but it is adjacent to a public footpath.  It was first brought to my attention by a geocache placed close by.   The memorial is now part of the Somerset Wildlife Trust's Discovery Trail in Great Breach Wood.  When I first visited 12 years ago I think there was more of a clearing around the obelisk.

Great Breach Wood was given to the Somerset Wildlife Trust by its previous owner Colin Trapnell in 1972.  On sunny days in the summer butterflies, including silver washed fritillaries, speckled woods, meadow browns, purple hairstreaks and marbled whites, can be seen in the glades and along the rides.  Roe deer are present in the wood and more than 600 types of fungi have been recorded. Most of the oak and ash trees in the wood were planted in the 1830s.  Copley House once stood in the wood but was demolished at some time before 1900.  The wood was also used as an army training camp in the Second World War. 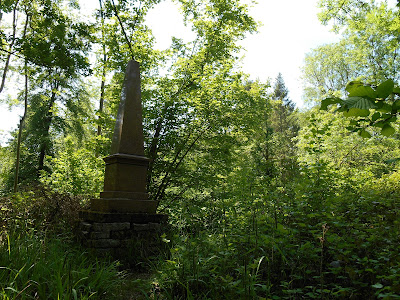 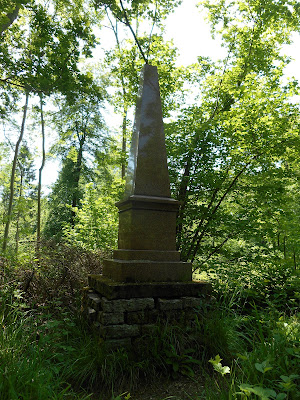 The Obelisk in Great Breach Wood 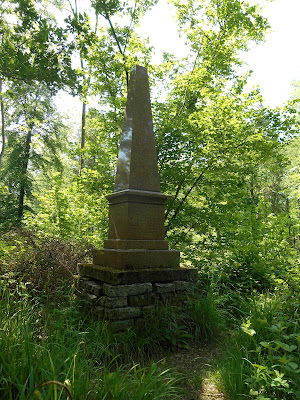 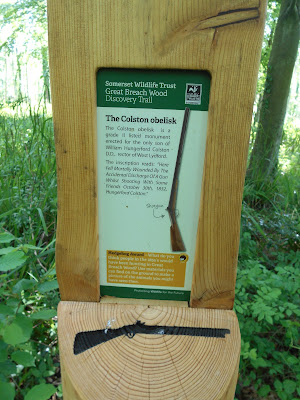