Ashwick Grove House is a shadow of its former self.  In the late 18th century an existing house was altered and enlarged for the agricultural improver John Billingsley (1747-1811).  His family had lived there since the 1690s.  At the rear of the house there was a row of buildings, which were cut into the rockface and possibly used as cold stores.  The main entrance to the house was along a tree lined avenue from the south.  There was a lodge house on what is now Fosse Road.  The Fosse Way runs roughly parallel to the avenue and no more than a couple of hundred metres to the east of it. The house stood in a landscaped park and had a formal garden adjacent to the east side of the house and a wilderness garden to the east of the formal garden.  The wilderness garden blended into Home Wood.  There was a rustic stone grotto set high on the steep slopes of Home Wood.   The grotto is apparently still there, although very overgrown.

After John Billingley's death in 1811 the house stood empty for some years before being bought by the Strachey family who lived there from c1830 until 1937.  The estate then had to be sold to pay death duties.  Presumably there were no buyers for the house, as it was partially demolished in 1955 with some of the architectural features being salvaged and sold at auction.

Since then nature has reclaimed the site and now trees grow where there were once grand rooms.  Sometime after 2000 the last remaining part of the front elevation collapsed into a heap of rubble.  The house is still rather optimistically marked on the 1:25,000 scale Ordnance Survey map.

An avenue of yew trees is still growing as you approach along a path from the east.  However other trees have now grown up around them.  The former stable block and coach house, which lie to the west of the main house, have been converted into houses.

My thanks to Sue for taking the photos below for me. 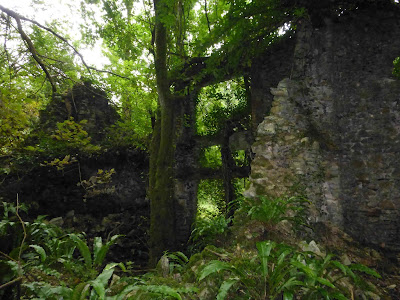 Ferns are thriving in the ruins 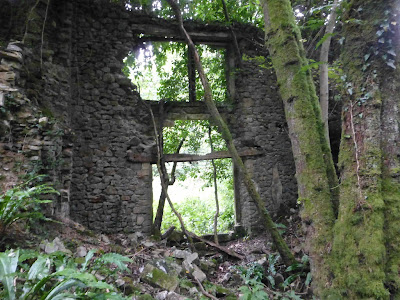 One of the few remaining walls still standing 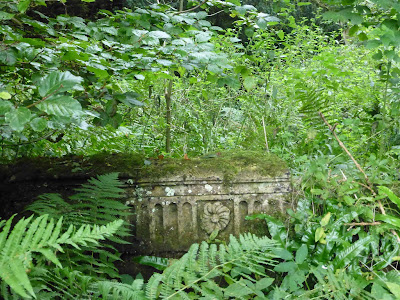 The remains of a garden wall? 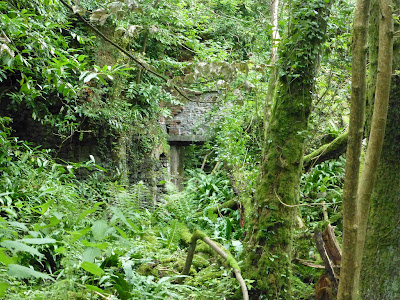 A jungle reclaims the house
Posted by St Kilda at 14:18