Aubrey Nigel Henry Molyneux Herbert, who was born on 3rd April 1880 at Highclere Castle in Hampshire, was the son of Henry, 4th Earl of Carnarvon and his second wife Elizabeth Howard.  George Herbert, the 5th Earl of Carnarvon, who discovered the tomb of Tutankhamun, was his half brother.  In 1910 Aubrey Herbert married Mary Vesey, daughter of Ivo, 4th Viscount de Vexi.  They had a son and three daughters.  At the time of his marriage his mother gave him the estate of Pixton Park near Brushford, as well as a property in Portofino, Italy.

Aubrey Herbert was the Conservative (and later independent) MP for South Somerset from 1911-1918 and for Yeovil from 1918 until his death. He spoke several European languages fluently and travelled extensively in Turkey and the Balkans.  He advocated Albanian independence and was partly responsible for the creation of the independent state of Albania after the First World War.  He was twice offered the throne of Albania but declined it on both occasions.

Despite having very poor eyesight Aubrey Herbert joined the Irish Guards in 1914 and served with them in France.  He later worked in intelligence in Italy, Greece, Turkey, Egypt and Mesopotamia. He was a friend and ally of T.E. Lawrence.   He was also a friend of the author John Buchan, who based the hero in his novel Greenmantle on Aubrey Herbert.

Aubrey Herbert died in London from blood poisoning on 26th September 1923.  Sir Edwin Lutyens was a friend of the Herbert family.  He designed a chapel as a memorial to Aubrey Herbert, which was built on to the north side of St Nicholas's Church in Brushford in 1926.  It has a cross shaped stained glass window at its east end.

An effigy of Aubrey Herbert was made by Cecil de Banqueire (or de Blaquiere) Howard, an American sculptor who worked in Paris.  It is located at the south side of the Herbert Memorial Chapel.  It is hollow inside. 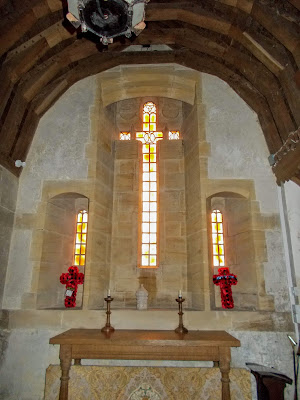 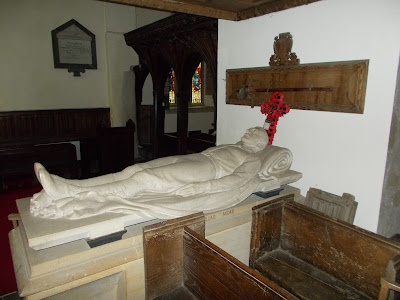 Effigy of Aubrey Herbert in St Nicholas's Church, with a ceremonial sword above his head 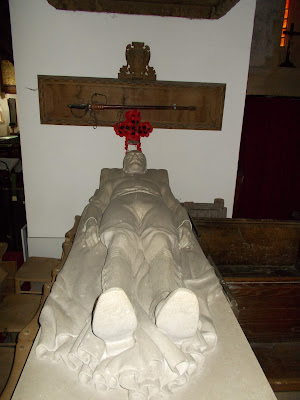 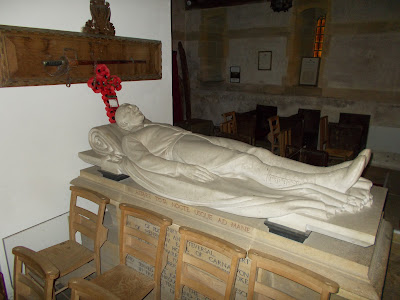 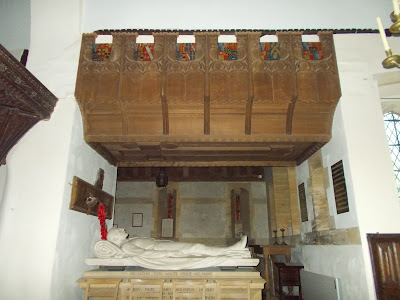 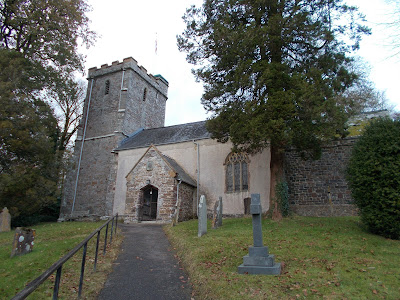 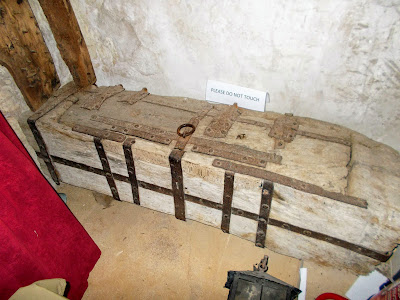 12th century parish chest hollowed out of a single piece of oak.  It is now located in the corner of the Herbert Memorial Chapel. King Henry II (1154-1189) decreed that every parish should have a chest to collect contributions to pay for the Crusades.  These chests were later used for keeping books, documents and vestments safe. 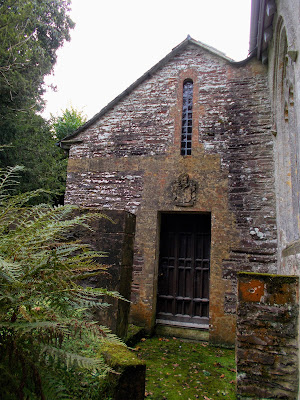 Exterior of the Herbert Memorial Chapel 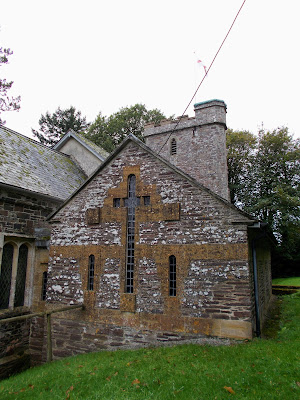 East end of the exterior of the Herbert Memorial Chapel showing the cross window
Posted by St Kilda at 15:49