St Michael's Church in Minehead is home to a wooden carving of a man dressed in a green jacket and breeches and wearing what looks like a Santa hat.  He is currently located on top of the southern end of the rood loft inside the church.  He is known as Jack Hammer and his original purpose was probably to strike the passing of time on the church clock.  He is first mentioned in the churchwardens' accounts in 1624.

Jack Hammer was originally located on top of the box which contained the workings of the tower clock, which was situated in the west entrance to the church but the workings were moved into the ringing chamber in 1929.

The Minehead Jack still has a bell, which is pulled manually to announce the start of the main Sunday morning service. 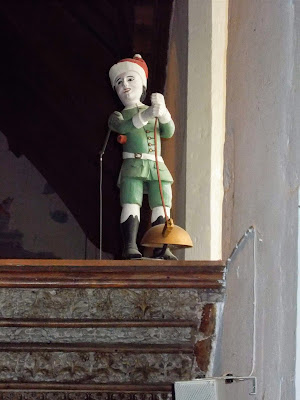 Close up of Minehead's Jack Hammer 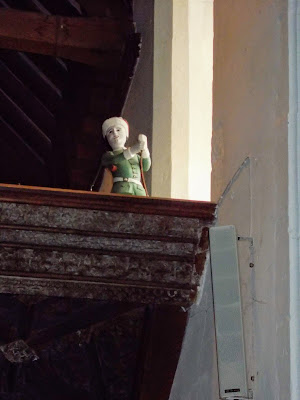 Jack Hammer on the rood loft
Posted by St Kilda at 14:38