Thomas Coryat(e) was born in the village of Odcombe in around 1577.  His father George was the rector of Odcombe.  Thomas went to school in Winchester.  He then went to Oxford University for three years, where he studied Greek and Latin, but he left without a degree.  He wanted to see the world and become famous.  He joined the household of Henry, Prince of Wales, thanks to his acquaintance with the Phelips family of Montacute.  He was the unofficial court jester.

In May 1608 Thomas sailed from Dover to Calais and travelled on to Paris.  He was befriended by members of King Henri IV's household.  He then travelled on to Lyon, Savoy, Turin, Milan, Mantua, Padua and Venice.  He walked some of the way, carrying only a staff and a knife for protection, but he also travelled by boat, horseback, coach and cart.  He arrived in Venice on 24th June 1608 and stayed in the city for 6 weeks.  He then returned to England via Padua, Vincenza, Verona, Bergamo, Zurich, Basel, Strasbourg, Heidelberg, Mainz, Cologne, Middelburg and Flushing.  He was threatened with violence by a German peasant in the Black Forest when he was caught picking grapes in a vineyard.   He sailed from Flushing (Vlissingen) in the Netherlands to London and arrived there on 3rd October 1608, having travelled approximately 1,975 miles.

On his return to Odcombe Thomas Coryat hung his shoes up in the parish church.  They remained there until the early 18th century.  They were lost at some point after this and today there is a stone replica of the shoes hanging on the wall in the church of St Peter and St Paul.

Table forks were widely used in Italy at this time, but not in England.  Thomas acquired one, which he brought back to England and he is credited with introducing forks to this country.

Thomas Coryate wrote a book about his experiences called Coryats Crudities.  Thomas asked well known people to write commendatory or panegyric verses to preface his book.  About 60 people supplied contributions, some of which mocked or insulted Thomas.  The book was published in 1611.  It was possibly the first ever guidebook for travellers to Europe.  The book contained illustrations; statistics; architectural descriptions; information about local customs, prices, exchange rates, food and drink.  In the book he described how the Italians shielded themselves from the sun and he was the first person to use the word "umbrella" in English literature.

On 20th October 1612 Thomas set off again on his travels. He sailed to Constantinople (now Istanbul), in Turkey where he stayed for 10 months and learnt Turkish and Italian.  In January 1614 he sailed to Iskenderun in Turkey and then travelled on to Aleppo (Syria).  In March 1614 he walked with a caravan of Christian pilgrims to Jerusalem via Damascus.  He then visited Nazareth, Bethlehem, Jericho and the River Jordan before walking back to Aleppo.  He stayed there for 4 months writing up his notes, which he sent back to England.  These were eventually published in 1625 by Thomas Purchas in his Purchas his Pilgrimes.

Thomas Coryate, who was known as the Odcombian Legstretcher, then decided to walk to India, to prove he was the greatest walker in the world.  He joined a caravan of people and walked to Isfahan (Iran) via Diyarbakir (Turkey), Tabriz (Iran) and Qazvin (Iran).  After 2 months in Isfahan he joined another caravan and walked to Ajmer in India via Kandahar (Afghanistan), Multan (Pakistan), Lahore (Pakistan), Delhi and Agra. He arrived in Ajmer in July 1615, having walked a total of about 3,300 miles from Aleppo to Ajmer.  He stayed in Ajmer for 14 months where he learnt Persian and Hindustani and continued to study Turkish and Arabic.  In September 1616 Thomas left Ajmer and visited Kangra and Hardwar before returning to Agra in July 1617.  He then travelled 400 miles to visit the ruined city of Mandu.

In November 1617 Thomas set off for Surat.  He died of dysentery at Surat in Gujarat in December 1617.

"its wholesome and pleasant air; its wool; its Church 'being erected upon so loftie a place that it overprieth and overtoppeth the whole countrie round about', its sweet springs of water, and finally and most important, the love and unity of its inhabitants, 'for we all from the verie highest to the lowest are most firmly knit together in an indissoluble knot of friendship." 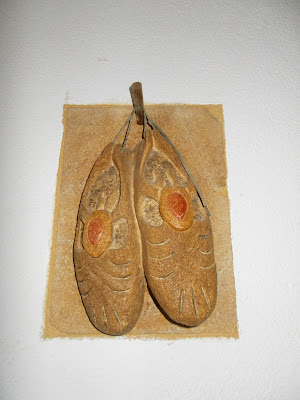 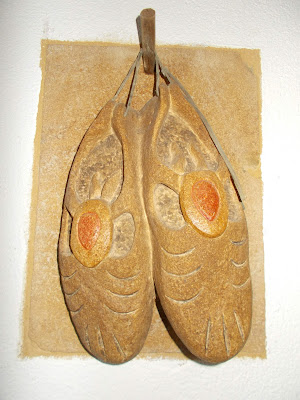 Am I the only one who thinks the shoes look like flatbreads decorated with cheese and tomatoes? 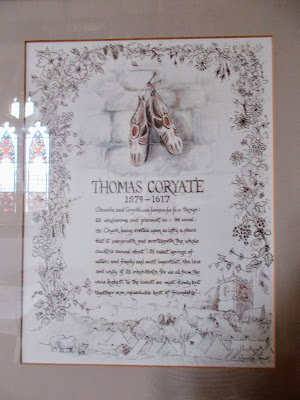 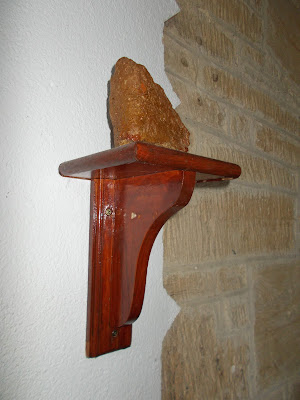 Piece of brick from Thomas Coryate's grave in Surat, India 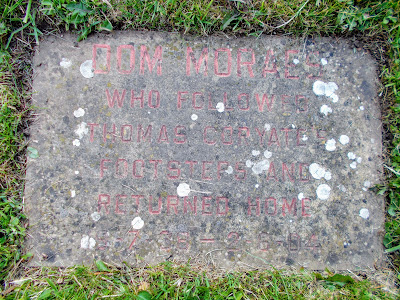 Dom Moraes (19th July 1938 – 2nd June 2004) was an Indian writer and poet.  He wrote in English and published a number of books.  He was fascinated by Thomas Coryate's life and visited Odcombe on several occasions.  In 2003 he and his partner Sarayu Srivatsa visited Odcombe to promote their book about Thomas Coryate - The Long Strider: How Thomas Coryate Walked from England to India in the Year 1613.  He brought with him a piece of brick from Thomas Coryate's grave and this is now mounted on a shelf in Odcombe Church, next to the replica shoes.

After Dom's death in 2004, Sarayu brought some earth from his grave in India and scattered it in Odcombe Churchyard.  He also installed a memorial stone to Dom in the churchyard close to the main entrance to the church. 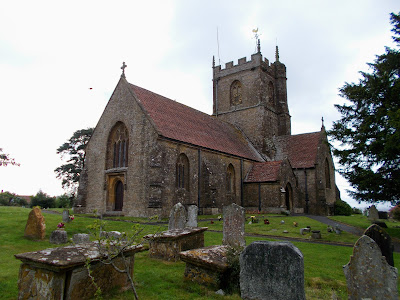 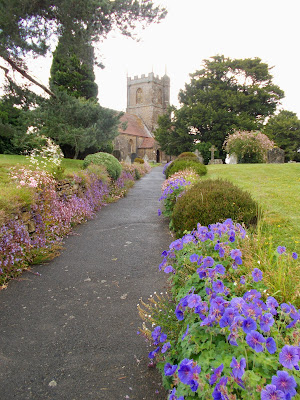