Henry John Patch (known as Harry) was born at Fonthill Cottage, Combe Down near Bath on 17th June 1898.  His parents were William John and Elizabeth Ann Patch and he had two older brothers George and William.  All of them lived to considerable ages.  Harry left school in 1913 and became an apprentice plumber.

In October 1916 Harry was conscripted into the army.  He travelled to France in June 1917 and was drafted to the 7th battalion of the Duke of Cornwall's light infantry as a Lewis-gunner.  He fought at Passchendaele (also known as the Third Battle of Ypres). He was seriously injured by shrapnel on 22nd September 1917 and spent the rest of the war recovering from his injuries.

After the end of the First World War Harry returned to work as a plumber in Gobowen, Shropshire.  In 1919 he married Ada Billington in Shropshire and they had two sons: Dennis and Gordon (known as Roy).  Two years later Harry got a job in Bristol where he worked on the plumbing for the Wills Memorial Tower (part of Bristol University.  He later set up his own plumbing business in Combe Down but had to sell it at the beginning of the Second World War.  During the Second World War he served with the Auxiliary Fire Service in Bath.

After the Second World War Harry worked for a company near Yeovil until his retirement in 1963.  Ada died in 1976 and Harry moved to Wells to live with his son Dennis.  In 1982 he married Kathleen (known as Jean) Joy.  She died in 1989.

Harry never talked about his experiences in the trenches until he was almost 100 when he was persuaded by Richard van Emden to take part in a television documentary called Veterans.  He later made several trips back to the battlefields of the First World War. In 2008 Harry collaborated with Richard van Emden to write his autobiography: The Last Fighting Tommy.

When he was 100 Harry moved to the Fletcher House Care Home in Wells, where he met Doris Whitaker and they became close companions.  He died in Wells on 25th July 2009 aged 111.  His funeral was held at Wells Cathedral on 6th August 2009 and he was buried in the churchyard of St Michael's Church, Monkton Combe close to his parents and brother.

In 2012 a memorial stone was erected outside the Wells and Mendip Museum.  It is made of Doulting stone and weighs 5 tonnes.  It was unveiled in May 2012.

Let's leave the last words to Harry himself:

"Why should the British government call me up and take me out to a battlefield to shoot a man I never knew, whose language I couldn't speak? All those lives lost for a war finished over a table. Now what is the sense in that?" 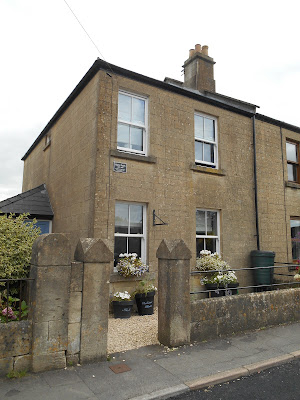 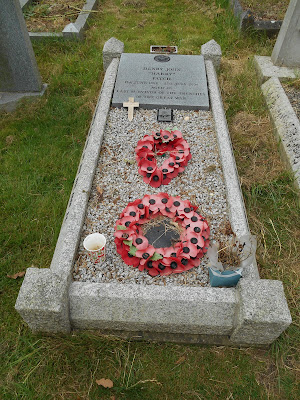 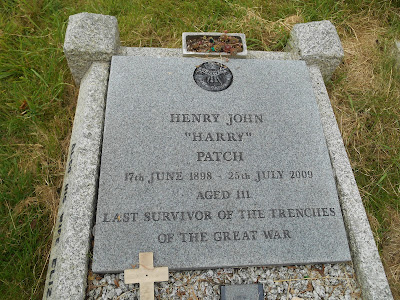 Inscription on his tombstone 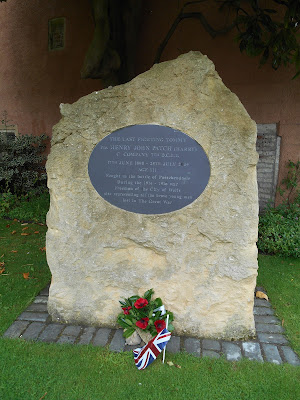 Memorial outside the Wells and Mendip Museum 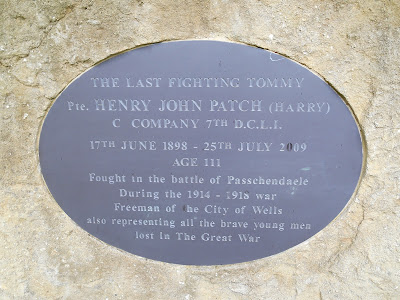 Plaque on Harry's Memorial in Wells
Posted by St Kilda at 12:51