The Monmouth Rebellion and the Battle of Sedgemoor, 1685

The Battle of Sedgemoor took place near the village of Westonzoyland on 5th/6th July 1685. Rebels led by the Duke of Monmouth were defeated by James II's troops led by Lord Feversham.

James, later the Duke of Monmouth, was born in Rotterdam in the Netherlands in 1649.  He was the illegitimate son of King Charles II and Lucy Walter.  Both his parents had sought refuge in the Netherlands during the English Civil War. It has been claimed that his parents married each other but this has never been proved.  As a child James lived with his mother in many locations in the Netherlands, Flanders and France and briefly in London in 1656.  After a short imprisonment in the Tower of London in 1656, James and his mother moved back to Flanders.  He was kidnapped by his father in 1658 after his mother attempted to blackmail his father by threatening to make public his love letters to her.  James's mother died later the same year.  He then lived in Paris under the protection of William, Lord Crofts and he used Crofts as his surname.

Charles II was restored to the throne in 1660 but James was not summoned back to England until 1662.  He joined the royal court in London and became one of his father's favourites.  In February 1663 he was created Duke of Monmouth, Earl of Doncaster and Baron of Fotheringay (the last title was later changed to Baron Scott of Tynedale) and a Knight of the Garter.  In April 1663 he married wealthy Scottish heiress Anne Scott, Countess of Buccleuch (who was only 12 at the time) and he changed his surname to Scott.  The Duke of Monmouth had four children with his wife but he also had a succession of mistresses.

There was speculation in 1662-4 and again in 1667 that Charles II would declare that Monmouth was his legitimate son.  This worried Charles II's brother and heir, James, Duke of York.  In about 1668 the Duke of York became a Catholic.  Many people in England would have preferred the Protestant Monmouth to succeed to the throne on the death of his father.

In 1668 Monmouth became Captain of the Life Guard and in 1670 he was admitted to the Privy Council.  He commanded English troops on the continent of Europe in the Anglo-Dutch War of 1672-4.  In 1678 Monmouth became Captain General of all the armed forces in England and Wales.  The following year he defeated a rebellion by some Scottish Presbyterians at Bothwell Bridge near Lanark.

The question of the succession remained unresolved and in September 1679 Charles II banished both Monmouth and the Duke of York from England.  Monmouth returned to England in late November 1679.  Charles II was angry with his son for returning and he stripped Monmouth of most of his offices and ordered him to leave the country.  Monmouth refused to go and support for him continued to grow.

Monmouth fled from England in early 1684 after taking part in the Rye House Plot, a Whig conspiracy against his father and uncle.  He sought refuge in the Netherlands.

Charles II died suddenly on 6th February 1685 and the Duke of York became King James II.  Monmouth met with Scots in exile in the Netherlands led by Archibald Campbell, the 9th Earl of Argyll and they plotted co-ordinated rebellions in Scotland and the West Country. It was also hoped that Cheshire and London would rise in support of Monmouth.   Argyll set sail for Scotland on 2nd May 1685.

Monmouth landed at Lyme Regis on June 11th 1685 with 82 followers.  He stayed in Lyme Regis for a few days gathering supplies and enlisting recruits and then marched to Taunton via Axminster, Chard and Ilminster, accumulating more supporters along the way.  He reached Taunton on 18th June where he recruited more supporters and was proclaimed king.  The same day, his rebellion in Scotland having failed, Argyll was captured (he was executed in Edinburgh on 30th June 1685). Monmouth's rebel army numbered between 5,000 and 7,000 at its height.

On 21st June Monmouth left Taunton for Bridgwater and then travelled on to Glastonbury and Shepton Mallet.  He was hoping to reach Bristol but was forced by Royalist troops at Keynsham to change his route and aim for Bath.  He was unable to capture Bath and retreated to Norton St Philip on 27th June, where he spent the night at The George Inn and survived an assassination attempt.  Monmouth moved to Frome on 28th June.  While he was in Frome he received news of the defeat of Argyll in Scotland.   The anticipated uprisings in Cheshire and London had failed to materialise and Monmouth proposed abandoning his attempt to become king but he was persuaded to carry on by Lord Grey.  However some of his rebels began to desert him.

Monmouth and his remaining followers, who were comprised mainly of untrained and ill-equipped farm workers, artisans and nonconformists, marched back to Bridgwater via Shepton Mallet, Wells and Glastonbury, arriving in Bridgwater on 3rd July.  On the night of 5th July Monmouth tried to surprise the king's troops, led by Lord Feversham and John Churchill (later the Duke of Marlborough), who were camped on Sedgemoor near the village of Westonzoyland.  However when they were still a mile away from the Royalist camp, the alarm was raised.  Monmouth's men outnumbered their opponents but Feversham's men were trained soldiers.  Monmouth's men failed to cross the Bussex Rhyne to get closer to the Royalists and as dawn broke Feversham's men advanced across the rhyne and the rebels fled.  Hundreds of Monmouth's men were killed.  Most of the rest were rounded up and imprisoned in St Mary's Church, Westonzoyland.  The dead rebels, who numbered between 727 and 2,700 (contemporary accounts vary but the lower number is the more likely) were buried on the battlefield, although the exact location of the graves is not known for certain.  Most of the 27 dead Royalists were buried in the churchyard of St Mary's Church, Westonzoyland.  The Monmouth Rebellion is sometimes known as the Pitchfork Rebellion.

1,300 of Monmouth's suspected followers were tried by five judges led by Judge George Jeffreys at various locations in August and September 1685 at what became known as the Bloody Assizes.  The first trials were held in Winchester and then the judges moved on to Salisbury, Dorchester, Taunton and Wells. The vast majority of Monmouth's followers were found guilty and sentenced to death, although only about 250 were executed.  850 had their sentences commuted to transportation to the West Indies.

Judge Jeffreys became known as the Hanging Judge.  After the Glorious Revolution of 1688 when James II was overthrown and replaced by William of Orange and his wife Mary, who was James II's daughter, Judge Jeffreys was imprisoned in the Tower of London.  He died there in 1689 of natural causes.

There is a memorial to those who died at the Battle of Sedgemoor on the west side of Langmoor Drove to the north of the hamlet of Bussex.  You cannot access it by car - you can drive to Bussex Farm where there is space to park a couple of cars and an information board with maps and a written account of the battle.  From Bussex Farm it is about half a mile along a track to the site of the memorial, which is in a fenced off compound.  There are two further information boards at the memorial.

The inscription on the main memorial reads as follows:

In addition to the above memorial, there are 4 staddle stones, which commemorate those who have died in subsequent wars: Seven Year's War, Napoleonic Wars, First World War, Second World War. 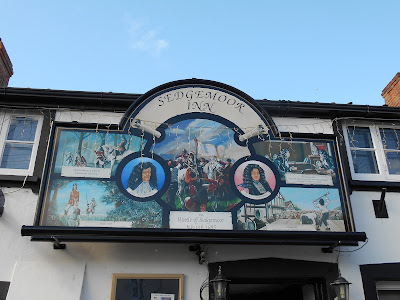 Battle Mural above the front door of the Sedgemoor Inn, Westonzoyland 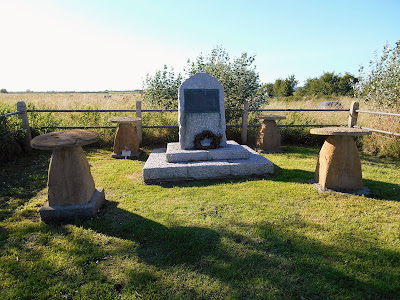 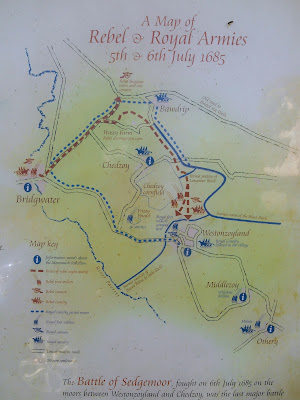 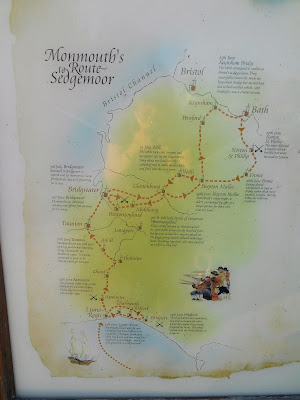 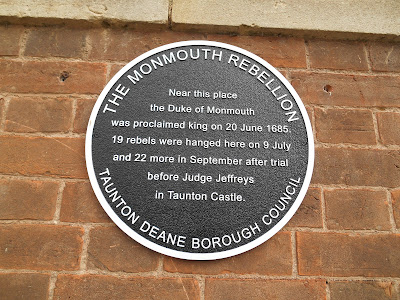 Plaque on the Market House in Taunton 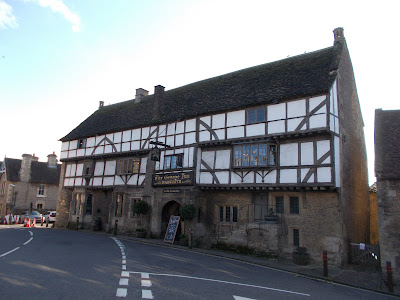 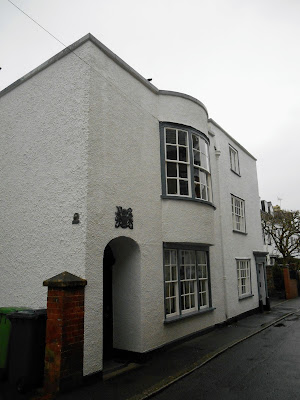 9 Monmouth Street, Topsham, Devon
The Duke of Monmouth is said to have made a speech in this house during a visit in 1680.  Monmouth Street was formerly called New Street.
Posted by St Kilda at 15:02