Ernest Bevin was born in Winsford, a village in the heart of Exmoor, on 7th March 1881.  His mother was Diana Tudball or Tidbould.  She married an agricultural labourer called William Bevin in 1864 but he left his family in 1876 or 1877.  Diana called herself a widow after his departure and it is not certain who Ernest's father was.  He was Diana's 7th child.  After her death at the age of 48 in 1889, Ernest went to live with his sister Mary Jane and her husband George Pope in Morchard Bishop and Copplestone in Devon.

Ernest went to school in Winsford and later in Colebrook and Crediton.  After leaving school in 1892 he worked on two farms at Chaffcombe and Beers.  In 1894 he moved to Bristol where he lived with his older brothers Jack and Albert.  He had jobs in a bakehouse, shop and restaurant and as a van boy and a horse tram conductor.  He then became a van delivery driver for a mineral water firm called G.C.King in 1900.  For two years from 1906 he ran the mineral water firm's refreshment rooms.  He then had a job for another mineral water company as a van delivery driver.  During this time he met and married (although it is not known when or where) Florence Anne Townley.  They had one daughter, Queenie.

Ernest Bevin became interested in trade unions and in 1910 he became the Chairman of a branch of the Dockers' Union.  In 1911 he became a paid trade union official for the Dockers' Union.  He worked for the trade union movement in various roles during the First World War.   He stood for parliament unsuccessfully in 1918 (Central Bristol) and 1931 (Gateshead).  He played an important role in the creation of the Transport and General Workers Union by the merger of 14 trade unions in 1922 and was its first General Secretary.  During the interwar years Bevin became closely involved with the Labour Party.

When Winston Churchill became Prime Minister in 1940, he appointed Ernest Bevin to the role of Minister of Labour and National Service in the coalition cabinet.  Bevin was not an MP at this point, so he was hurriedly elected unopposed to the seat of Central Wandsworth in June 1940.  He soon mobilised a huge workforce committed to the war effort.  He diverted 48,000 military conscripts to work in the mines.  These men became known as Bevin Boys.

After the 1945 General Election Clement Attlee appointed Ernest Bevin to the post of Foreign Secretary.  He allied Britain to the USA in the Cold War against the Russians and helped in the development of the Marshall Plan.  He played an important part in the formation of NATO in 1949 and in the development of Britain's independent nuclear deterrent.

Ernest Bevin ate, drank and smoked too much and his health began to deteriorate after 1945.   He died of heart failure in London on 14th April 1951.  He has a College and Sixth Form Centre named after him in Tooting. 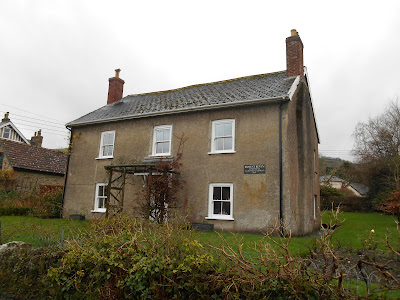 Ernest Bevin's Birthplace
The house in Winsford where Ernest Bevin was born and lived for the first 8 years of his life.  Today it is called Bevins Cottage but presumably it previously had some other name.