This pumping station is located between the railway and the Bridgwater and Taunton Canal at Firepool Lock in Taunton. Its purpose was to pump water from the canal into steam trains.  It was built on top of two lime kilns.  The lime kilns were built of grey lias stone and can clearly be seen underneath the pumping house. The red brick pumping house was built by Thomas Poole of Wellington sometime after 1866 when the canal and limekilns were bought by the Bristol and Exeter Railway Company. In 1877 a steel water tank with a capacity of 63,400 gallons was built on top of it.

The pumping station became disused with the transition to diesel power in the 1960s.   There used to be additional railway lines much closer to it but I understand that these were removed in the 1980s.  The Northern Inner Distributor Road now separates the pumping station from the railway.  The road, which took four years to complete, finally opened to traffic in the summer of 2017.

As part of the redevelopment of the Firepool Lock area, there are plans to convert the pumping station into a café and restaurant.  I'll believe it when I see it!  It is a listed building, which has presumably saved it from demolition.
Update May 2020 - the pumping station is still derelict but it now has blocks of flats on either side of it.  A new cycle and footpath has been built on the northern side of the Bridgwater and Taunton Canal, so it is now possible to get closer to the pumping station. 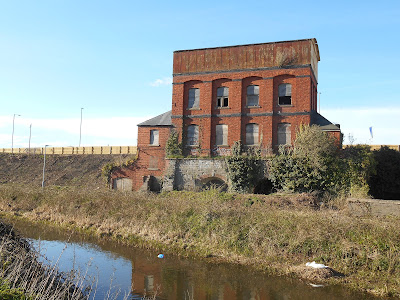 Firepool Pumping Station from the canal 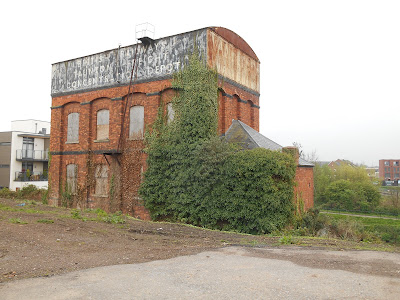 Firepool Pumping House from the railway side
The wording which can still be seen on the side of the pumping house says "British Railways.  Taunton Freight Concentration Depot."  I'm not entirely sure what a freight concentration depot is but I presume today it would probably be described as "logistics".  Taunton was designated a freight concentration depot in 1963 and remained one until 1972 when it was closed due to competition from road transport. 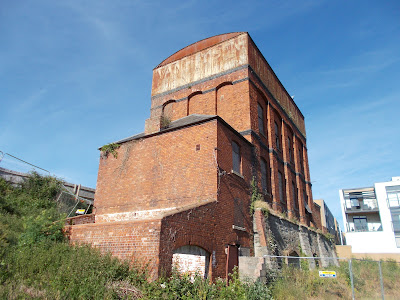 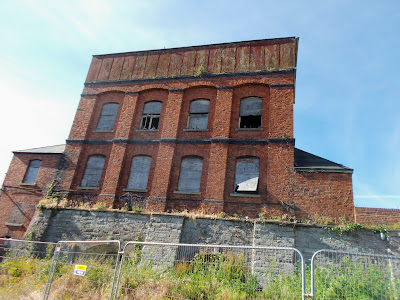