The concept of parochial poor relief dates back to the late 14th century but it was not until 1597 that legislation was passed, which required parishes to appoint Overseers of the Poor.  It was their responsibility to find work for the able-bodied poor and to provide parish houses for those who were unable to support themselves. In 1601 an Act for the Relief of the Poor was passed, which refined the 1597 act and made parishes legally responsible for looking after their own poor.  This was funded by a tax on local property owners and its distribution was administered by the Overseers of the Poor.  Parish poor relief was dispensed mostly as “out relief” in the form of food, clothing, fuel, rent payments or money to people in need living in their own homes.


In a few places workhouses were founded by local Acts of Parliament from the late 17th century onwards.  An Act passed in 1723, known as Knatchbull’s Act after its proposer Sir Edward Knatchbull, enabled single parishes or groups of neighbouring parishes to set up workhouses or to pay contractors to run their workhouses for them for a fixed fee. The poor had to undertake work in the workhouses.


The 1782 Relief of the Poor Act, which was also known as Gilbert’s Act after its proposer Thomas Gilbert, allowed neighbouring parishes to work together in unions to construct joint workhouses.  Each parish paid the accommodation costs of its own poor people but saved money by sharing premises. These workhouses were only supposed to house the elderly, sick and orphaned. The able-bodied poor were to be found employment near their own homes.  In many cases the workhouses were ordinary local houses rented for the purpose.  The unions were overseen by boards of Guardians.  One Guardian was elected from each parish.  Their work was overseen by a Visitor, who was appointed by local magistrates.
New Poor Law


The Poor Law Amendment Act of 1834 was designed to reduce public spending on poverty.  Under the terms of the act England and Wales were divided into unions of parishes.  Poor relief, which was funded by local taxation, was administered in each union by an elected Board of Guardians.  Each union was required to build a workhouse to house the people in its area who were in need of help.  In some places the unions took over existing workhouses, while in others new ones were constructed, although some places were slow to build them.
Inmates were clothed and received basic food rations and children were given some education.  However conditions in the workhouses supposed to be harsher than those for the poor outside their walls, in order to discourage people from entering them and thereby saving the parishes money.  Parish relief was no longer supposed to be given to the poor living in their own homes.  Many workhouses were overcrowded and insanitary, with the result that infectious diseases spread easily among the inmates.  Able bodied inmates were made to work hard, often doing unpleasant and monotonous jobs such as picking oakum or breaking stones.
Over time workhouses evolved into orphanages and hospitals for elderly and infirm people and those with mental health problems or learning disabilities. After 1908 children were no longer housed in workhouses. In 1929 poor law unions were abolished and their powers were passed to County and County Borough Councils. Workhouses were renamed public assistance institutions. The workhouse system was replaced by the National Health Service in 1948.
More information about the history of the poor law and detailed histories of individual workhouses can be found on this website: http://www.workhouses.org.uk/

Somerset was divided into 17 Unions:

Axbridge, Bath, Bedminster (later renamed Long Ashton), Bridgwater, Chard, Clutton, Dulverton, Frome, Keynsham, Langport, Shepton Mallet, Taunton, Wellington, Wells, Williton, Wincanton and Yeovil. Of these 13 have some or all of their constituent parishes in the current county of Somerset.

Little or nothing remains of the workhouses in Bridgwater, Chard, Langport, Wellington and Wincanton. 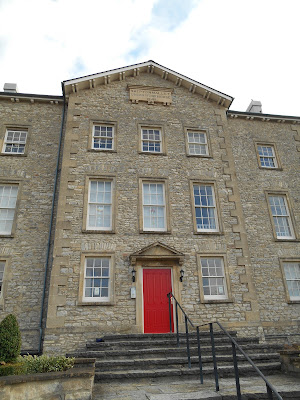 Shepton Mallet Union Workhouse was designed by Jesse Gane, who was also the architect of Clutton Union Workhouse. It was built in 1848 in West Shepton. In 1930 control of it was handed to Somerset County Council. In 1937 it became a home for people with learning disabilities. It later became the Norah Fry Hospital, which closed in 1990. In 2005-6 it was redeveloped for residential use. 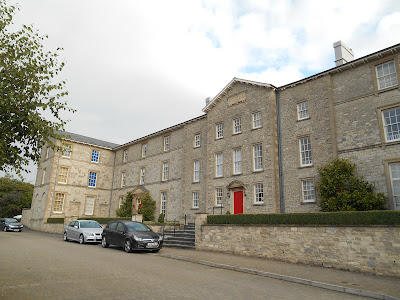 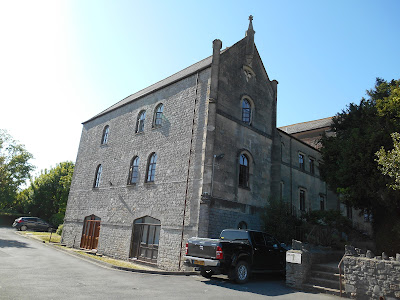 The Axbridge Union workhouse was erected in 1837 at the south side of West Street in Axbridge at a cost of £4,496.17s.6d.  The workhouse could accommodate 250 inmates. The architect was Samuel T Welch, who was also the architect of workhouses at Clifton and Wells.  In 1903, a new infirmary with 72 beds, designed by Mr A. Powell of Bristol was erected at the north-east of the workhouse at a cost of just under £7,000.  The site later became St John's Hospital. After its closure in 1993, the main building was converted into residential flats and is now called St John’s Court. 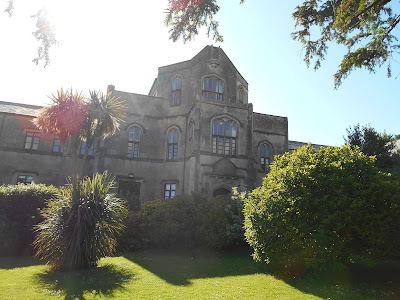 The front of the former Axbridge Union Workhouse 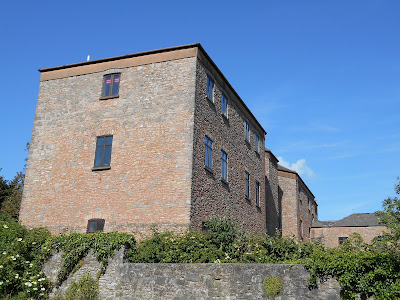 The rear of the former Axbridge Union Workhouse 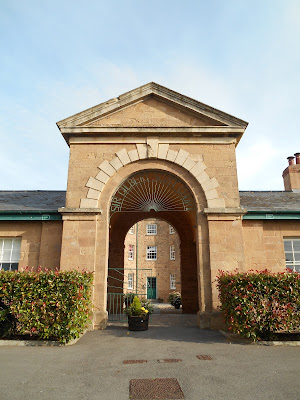 The Williton Union Workhouse, which is located on Long Street in Williton, was designed by George Gilbert Scott and William Bonython Moffat and completed in 1840. In 1930 it was renamed Williton Institution and in 1948 it became Williton Hospital. The hospital closed in the 1990s when a new hospital was built in the town and after 2000 the former workhouse was converted into residential units. 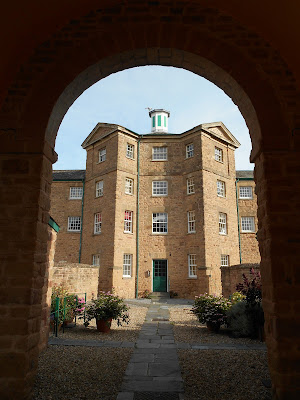 The main block of the former Williton Union Workhouse 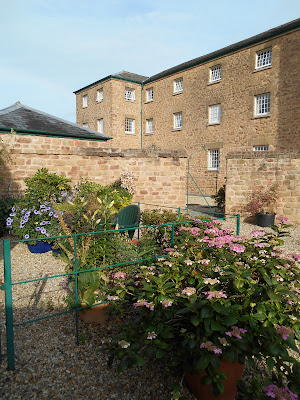 Lovely courtyard garden at the rear of the former Williton Workhouse 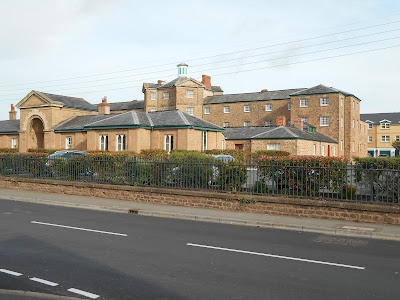 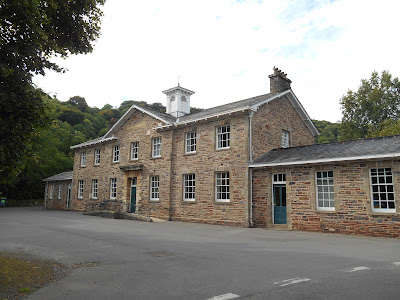 Dulverton Union Workhouse was designed by Edward Ashworth and built on the bank of the River Barle in 1854-55.  It was not used as a workhouse after 1930 but was later used as the Exmoor Training Centre for Girls.  It later became the rural district council offices and is currently the Exmoor National Park Headquarters. 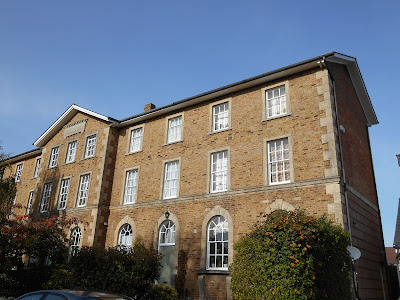 The entrance block of the former Taunton Union Workhouse
Taunton Union Workhouse was designed by Sampson Kempthorne and built on what is now Trinity Road in 1836-8.  It was built to a hexagonal pattern.  In around 1912 it became Taunton Poor Law Institution. From 1930 until 1948 it was Taunton Public Assistance Institution. In 1948 when the NHS was established it became Trinity Hospital.  Most of the buildings have been demolished but the entrance block has been converted to residential use. 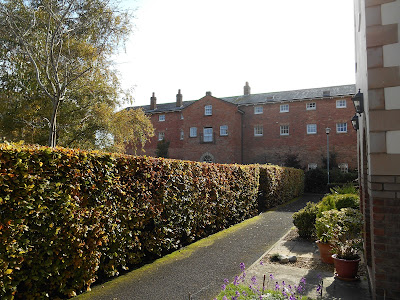 Rear of the entrance block of Taunton's former Union Workhouse 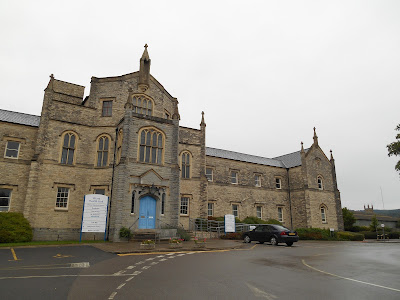 Wells Union Workhouse was built on the north side of Glastonbury Road in 1836-37. It was designed by Samuel T Welch, who was also the architect of Clifton and Axbridge Union Workhouses.  In 1930 the building was taken over by Somerset County Council.  In 1948 it was taken over by the new NHS and renamed Wells Infirmary.  In 1961 the name was changed to Priory Hospital.  It is still in use by the NHS but is now called Priory House. 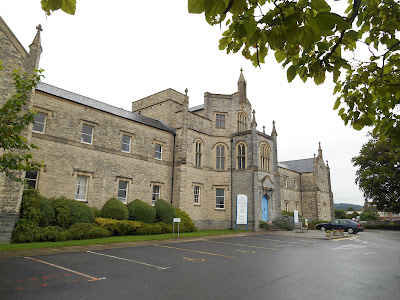 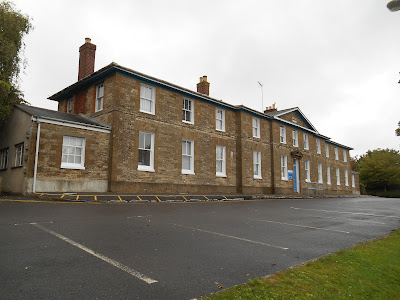 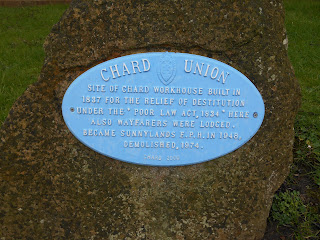 Plaque at the site of the Chard Union Workhouse in Wilkins Close off Avishayes Road.  The workhouse was built in 1837, became Sunnylands Elderly People's Home in 1948 and was demolished in 1974. 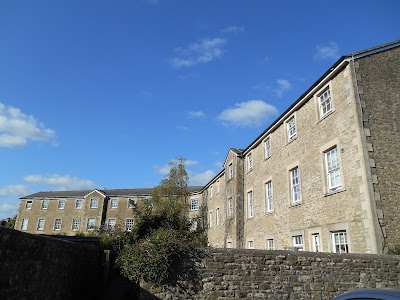 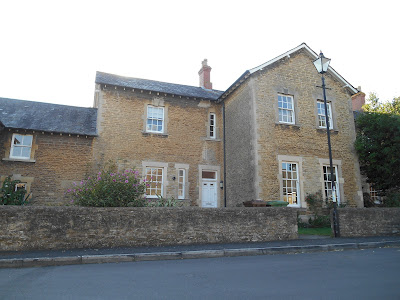 Infirmary Block, Frome Union Workhouse
Frome Union Workhouse was built in 1837-8 on the south side of Weymouth Road in Frome to accommodate 350 people.  It was designed by the architect Sampson Kempthorne and was based on a hexagonal pattern.  Later an infirmary block, lodge, school block and casuals' ward were added.  The workhouse eventually became Selwood Hospital, which closed in 1988.  The main buildings, casuals' block and infirmary block were converted into housing but the children's block was demolished.
﻿
Posted by St Kilda at 16:10