Holy Wells and other named springs

Holy Wells are not as common in Somerset as they are in Cornwall, where nearly every village seems to have one,  but they are more numerous than I realised, although not many of them have visible and publicly accessible remains.

What exactly is a holy well?  There is no definitive answer to this question but holy wells are usually believed to have curative powers or they were originally used for baptismal purposes or they are associated with and dedicated to a particular saint.  Many of the locations were probably already significant in the pre-Christian era.

Some of the springs are of clear pure water, while others contain various minerals e.g. the Chalice Well at Glastonbury is a chalybeate spring, which means the water contains iron, while the water issuing from the Black Well at Queen Camel contains sulphur and that from the spring at Barrows Farm between Middle and East Chinnock is salty.

By the time Dom Ethelbert Horne published his book Somerset Holy Wells and other Named Springs in 1923 many of Somerset's holy wells had been filled in, covered over or their exact locations forgotten.  Some place names suggest that they were named after holy wells but the evidence for this is sometimes rather tenuous e.g. Luckwell Bridge near Wheddon Cross (St Luke's Well), Holywell Lake near Wellington, Rumwell  near Taunton (St Rumbold's Well), Pedwell (St Peter's Well), Holwell near Cloford and Swell.


Edington Holy Well (grid ref ST 3888 3996) is located at the north end of the village by the side of the lane that heads north to Burtle.  It was restored in 1937, in a style that I think is reminiscent of 1970s crazy paving, in memory of Margaret Charlotte Fownes Luttrell.   The water apparently contains sulphur, although I could detect no smell when I visited in November 2014. 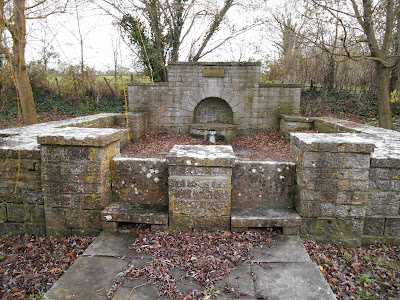 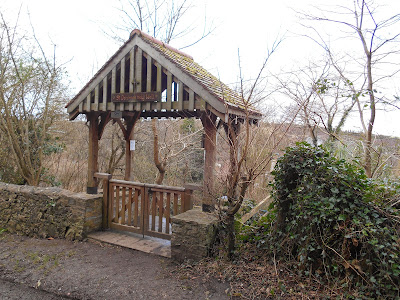 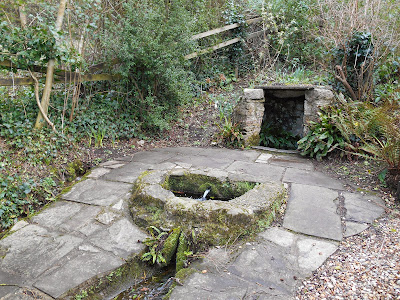 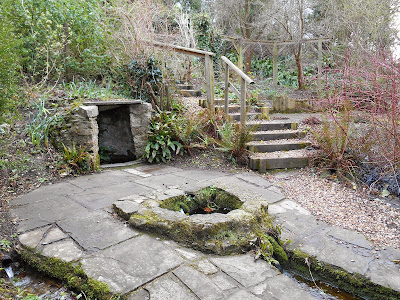 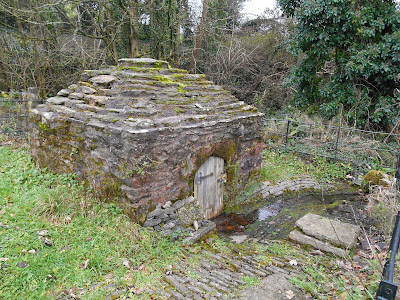 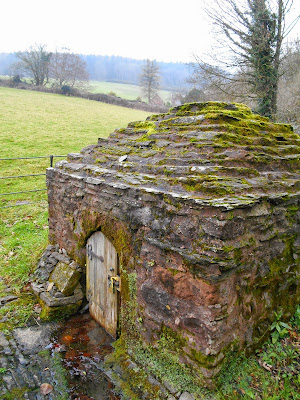 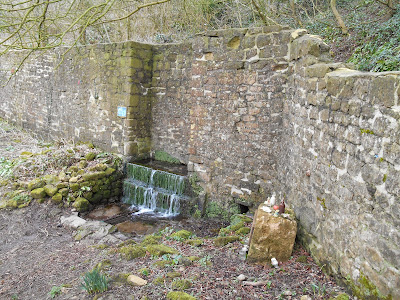 St Agnes Fountain (grid ref SS 9047 4736), which is located half a mile to the north of Allerford at the edge of the Allerford Plantation, doesn't live up to its name.  When I visited it in mid December 2014 with West Somerset Ramblers it was more of a trickle than a fountain. As it was nearly Christmas we sang Good King Wenceslas while we were there, as it seemed appropriate:

""Hither, page, and stand by me
If thou know'st it, telling
Yonder peasant, who is he?
Where and what his dwelling?"
"Sire, he lives a good league hence
Underneath the mountain
Right against the forest fence
By Saint Agnes' fountain."

It was constructed in 1820 and is named after the youngest daughter of Sir Thomas Acland, who owned the Holnicote Estate.  However the spring itself is much older and may have been significant to people prior to this date. 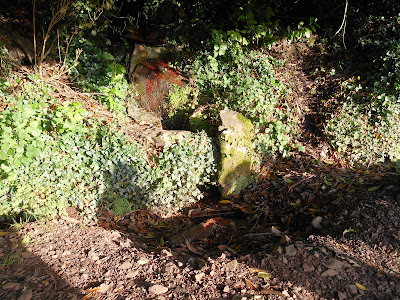 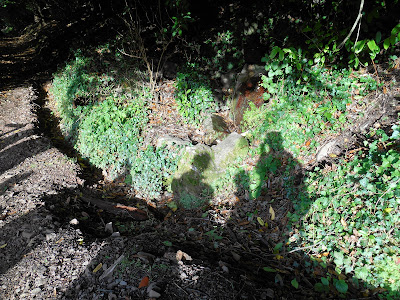 
On the banks of a small stream on the north side of the A39 at Brandish Street near Allerford (Grid Reference SS 906 466) there is a small brick built well head, which once covered a small medieval dipping well.  The idea behind the dipping well was that it was dug a few metres from the bank of the stream and that the water from the stream would be filtered through the earth, so that by the time it reached the dipping well it would be purer than the water in the stream.  The brick well head protected the well from dust, falling leaves etc.  The well has been filled in at some point and is now dry.
﻿ 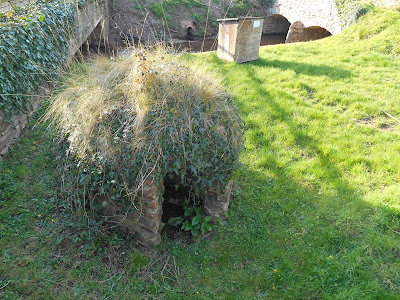 Dipping well at Brandish Street or maybe it is a pixie house?


St Andrew's Well at Stogursey has the same dedication as the village's parish church and has been a holy well for many centuries, if not millennia. The archway above the entrance to the well was probably built by the Egment family, who purchased the Manor of Stogursey in 1757.  Their arms are displayed on the inner face.  By 1847 the well was described as providing the only good drinking water in the village and it was noted that it had never been known to fail.  There are 2 wells and the right hand one was considered to produce the softest water for washing clothes in.  The well was restored in about 1870 by Peregrine Acland and his arms are displayed over the entrance archway.  Stogursey Parish Council restored the well again in 1979.  The well is located just off St Andrews Road at grid reference ST 202 428. 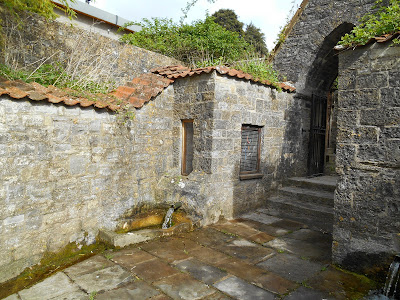 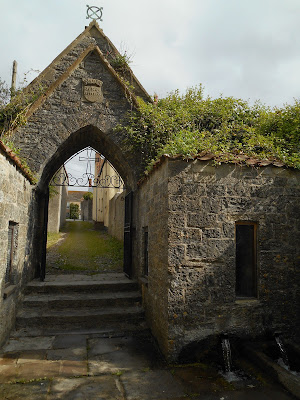 
Fair Lady's Well is located on a public footpath that forms part of the Monarch's Way, about a mile to the east of the village of Priddy.   It is situated on the boundary of Chewton Mendip and Priddy Parishes and close to the medieval and later lead workings of St Cuthbert's and Chewton Lead Mines.  Who the fair lady it is named after is unknown.  The water looked black and very unappetising when I visited in July 2015. Grid reference ST 545 508. 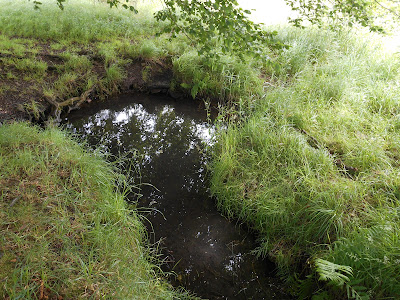 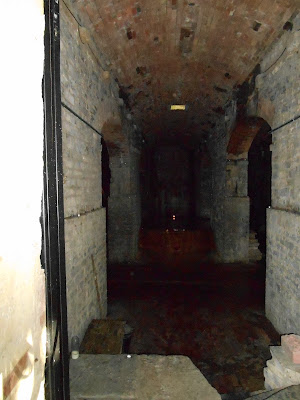 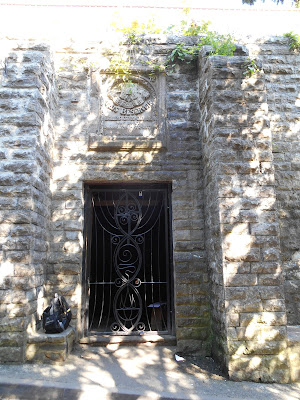 Entrance to the White Spring, Glastonbury 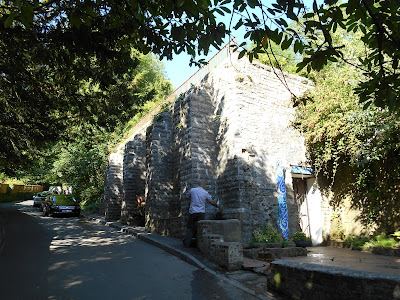 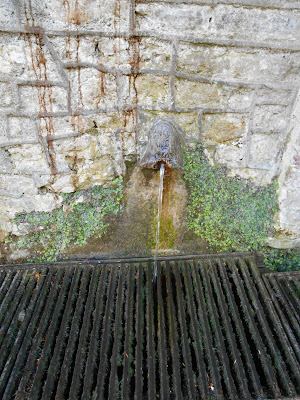 Sisters Fountain, Glenthorne.  I realise that technically this spring is in Devon and not Somerset but it is only just over the border and is such a delightful place that I have decided to include it.  It is located on the South West Coast Path about half a mile north of County Gate on the A39 but about 200 metres vertically below it. Bear this in mind if you decide to visit!  The current spring head only dates back to the early 19th century but legend has it that it marks the place where Joseph of Arimathea stopped off on his way up the Bristol Channel to Glastonbury in search of fresh water.  When he didn't find any he struck the earth with his staff and water gushed out. The spring runs down the hill into a manmade oval pool formed by stone rubble retaining walls.  The spring head and pool are above Glenthorne House, which was built for Rev Walter Stevenson Halliday and was begun in 1829.  Grid reference: SS 793 492. 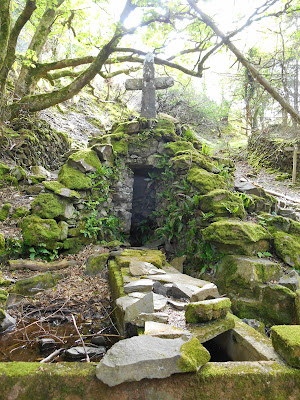 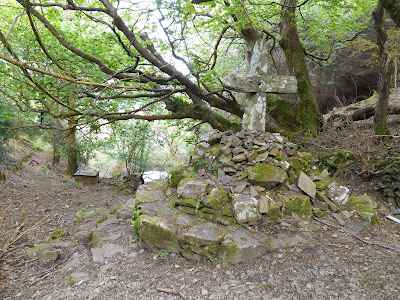 The present pump house at the Patwell in Bruton dates from the late 18th or early 19th centuries and replaced an earlier building on the same site.  According to the plaque on it was restored in 1984, is in working order and the machinery may be inspected by arrangement with the parish clerk 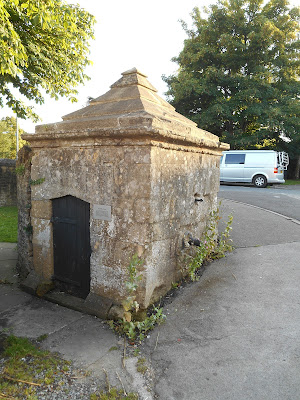 The Shad Well in Wincanton is located at the point where Shadwell Lane meets North Street (grid reference ST 710 288).  There is a big stone arch with two smaller arches underneath it and recessed into the back wall.  It is thought to have been built c1855/1865, possibly by the Somerset and Dorset Joint Railway to replace a previous building, which was buried by the new railway embankment, which was built at this time behind the well. The railway line ran from Bournemouth to Bath but closed in 1966.   The left hand archway has a stone basin in it and the right hand side one has a small pool of water. 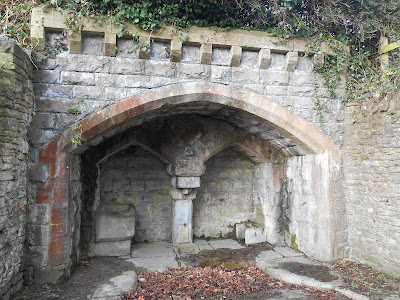 Shad Well, Wincanton
St Leonard's Well is situated in Conduit Lane, 400 metres west of the edge of Dunster village and on the north side of Grabbist Hill.  It is thought to have supplied water via a conduit to the priory and two public troughs in Dunster: one in the churchyard wall and another which was formerly located at the south end of the High Street.  The well head is thought to be 16th century.
﻿ 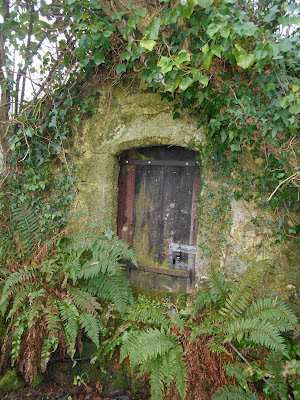 The holy well at East Coker is located behind the Forester's Arms pub in the hamlet of Holywell.
﻿ 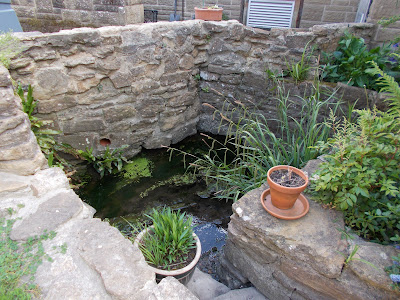 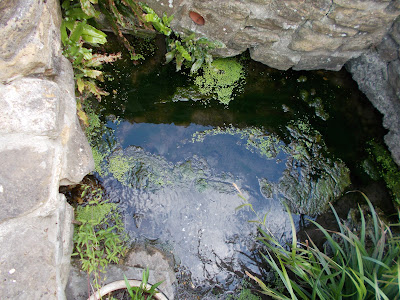 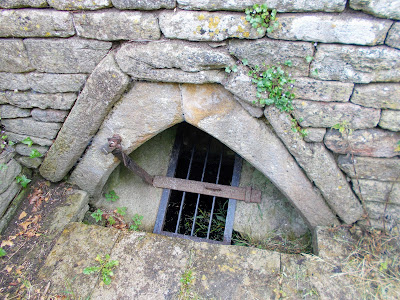 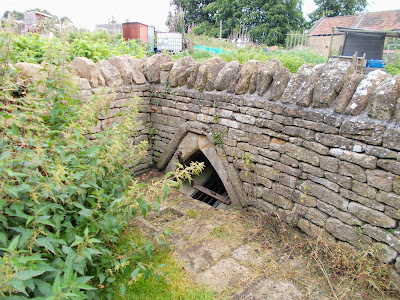 Littlewell is located on the A39 to the north of Coxley.  The natural spring is located in the field opposite and the water is then piped to the roadside well.  The well was probably created in the 19th century as a public water supply.  It was used for drinking water by those local people who did not have their own wells, until the mid 20th century, when mains water arrived in the village.  It is located on private land and was restored by the landowners in 2004. 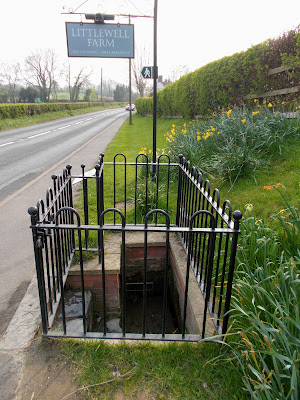 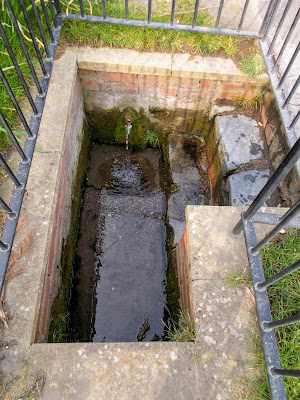 Further reading: Somerset Holy Wells and other Named Springs - Dom Ethelbert Horne, published by Somerset Folk Press in 1923.
This book is out of print but there are a few lending and reference copies available in various Somerset Libraries.
Posted by St Kilda at 09:47