The Sweet Track and other Ancient Trackways across the Somerset Levels

Trackways were constructed across the low lying marshy land of the Somerset Levels by Neolithic people to link the islands and hills together.  They were skilled woodworkers even though they only had stone axes and knives and wooden mallets and wedges to use as tools. The trackways would have been used by farmers and hunters.  Although off the beaten track today, in their time they were themselves very much the beaten track!

The Sweet Track is the oldest prehistoric trackway found in Britain.  It has been precisely dated by dendrochronologists in Sheffield and Belfast who studied the tree rings in the timber to 3807/3806 BC.  It is named after the peat cutter Ray Sweet, who discovered it in 1970.  It ran from the bottom of the Polden Hills near Shapwick towards the 'island' of Westhay.

The trackway was constructed across marshy ground where there was often standing water and where sedges and reeds grew.  Its aim was to provide a raised walkway to allow people to cross this part of the levels with dry feet even in winter.

Long pegs of hazel, alder, elm, ash and holly sharpened at one end were driven diagonally into the ground in pairs to hold posts or rails laid end to end in place.  Flat oak planks were then laid over the top of the poles and in the same direction as them.  In places spare pegs and pieces of planks and rails were wedged in to make the planks secure.  The ends of some of the planks were held in place by thin pegs driven through pre-cut holes vertically into the peat.

Neolithic people dropped or hid various artefacts along the route of the Sweet Track, which have subsequently been found by archaeologists e.g. a flint axe possibly from Sussex and an unused axe head of polished light green stone from the Alps.  A few bits of broken pottery have also been found and a wooden dish and some flint arrowheads.

The Sweet Track was built along the line of an even older structure, which is known as the post track.  This was comprised of long ash and lime planks laid on the surface of the marsh and held in place by vertical wooden posts mainly made from hazel, which were placed about 3 metres apart.

A short section of the Sweet Track has been reconstructed on the Shapwick Nature Reserve. 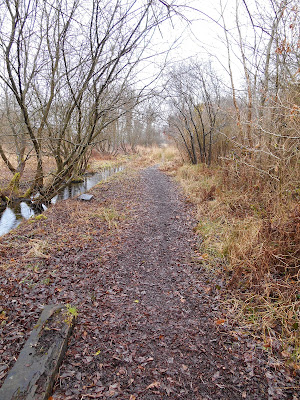 Line of the original Sweet Track 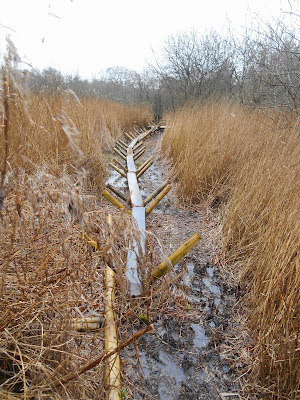 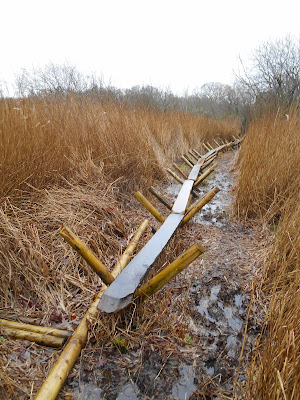 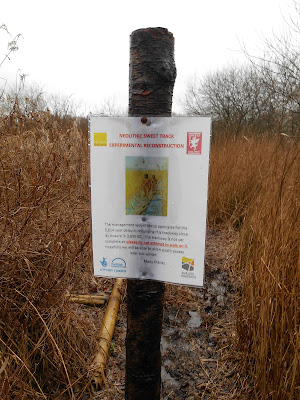 This notice by the reconstructed section of the Sweet Track says "The management would like to apologise for the 5,814 year delay in rebuilding this trackway since its closure in 3,800 BC.  The trackway is not yet complete, so please do not attempt to walk on it. Hopefully we will be able to allow public access later this winter."

Other later trackways have been discovered on the Somerset Levels.  The Walton Heath Track was a 40 metre stretch of carefully made hurdles or panels of coppiced hazel.  The Abbot's Way ran for 1.5 miles between the islands of Westhay and Burtle.  It was built around 2500 BC and was constructed using alder planks, slats and branches held in place by alder, hazel and ash pegs and stakes.  The Eclipse Track, which stretched across 1 kilometre of marsh near Meare, was constructed in around 1800 BC.  The Blakeway Farm Track, which was excavated in 1944 ran between Westhay and Mudgeley and is also Neolithic in origin.

The Meare Heath Track was discovered by archaeologist Arthur Bulleid in the early 1930s.  It ran from the bottom of the Polden Hills near Shapwick to the island of Meare.  More of it was exposed in the 1970s by peat cutters.  It was built around 1400 BC and its construction has similarities to a modern railway line - sleepers were placed at intervals over a bed of brushwood (guelder rose, alder buckthorn, hazel, alder and willow) and held in place by oak stakes driven through holes cut into the sleepers.  Pairs of oak planks were then laid at right angles to the sleepers and these where kept in place by the top of the oak stakes.  A short section has been reconstructed on the Shapwick Nature Reserve. 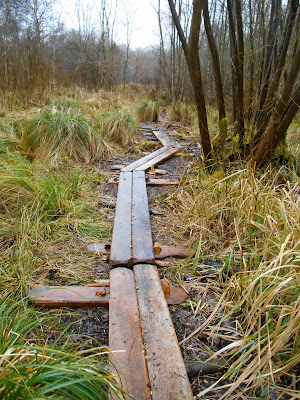 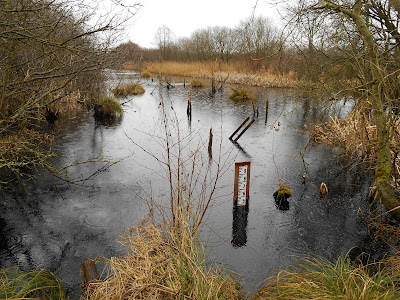 Could this be a ladder to the Underworld?  Or maybe as this is the Avalon Marshes, King Arthur is going to reappear at any moment?

Further Reading:
Lending and reference copies of both titles are available in various Somerset Libraries.
Posted by St Kilda at 06:35