In the late 18th and early 19th century several generations of the Fussell family ran a very successful iron works business in the area around Mells, Great Elm, Chantry and Nunney.  They produced edge tools, e.g. shovels, sickles, spades and scythes, as well as other agricultural implements.

The first iron works in the area was started by James Fussell in 1744.  His sons Austin and James continued his work and expanded the business at Mells.  At the same time one of his other sons, John, had opened another iron works at Nunney by 1766.  The company continued to do well and by 1800 they were exporting their products to Europe and America.  By the early 19th century the Fussell family were operating 5 iron works in the area - 3 along the Mells Stream between Mells and Great Elm, 2 in Railford Bottom near Chantry and one to the north of Nunney.

The next generation of Fussells - another James, another John and Thomas continued the work but a reliance of water power, rather than the more efficient steam power used by rival companies in the Midlands and north of England and the economic decline of English agriculture in the 1870s. led to the decline of the company.  The business was bankrupt by 1894 and it was taken over by Isaac Nash, who moved it to Worcestershire.  The remains of all 6 works can still be seen.  2 have been restored as private houses but the others are ruins.

The most impressive remains are the Upper (grid reference ST 734 488) and Lower (grid reference ST 739 489) Works in the Wadbury Valley to the south east of the village of Mells.  The extensive remains of buildings can clearly be seen from the bridle path that runs along the north side of the Mells Stream.  What surprised me most was that there were no interpretation panels and no health and safety notices, although there are plenty of places where you could fall a considerable distance.  Nature has now reclaimed the site and everything is covered in moss, ivy, brambles, ferns and, when we visited in early March 2015, snowdrops.  Iron ore was not smelted on the site but brought in as scrap or pig iron.  Steel may have been made on site.

The iron works are a designated Site of Special Scientific Interest, as the buildings, flues and tunnels provide roosting site for rare greater and lesser horseshoe bats

Fussells Ironworks, Mells: a brief history of the Ironworks, the Family and the Community by Ken Griffiths.  Published by Fiducia Press, 1996.

Men of Iron: the Fussells of Mells by Robin Thornes.  Published by Frome Society for Local Study, 2010 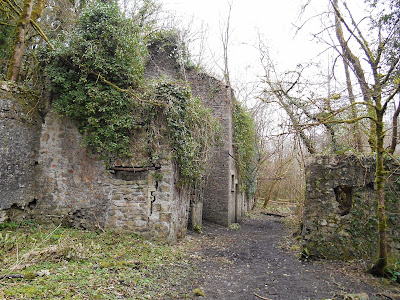 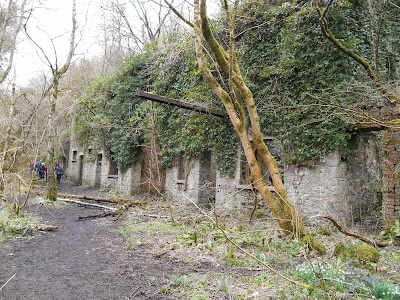 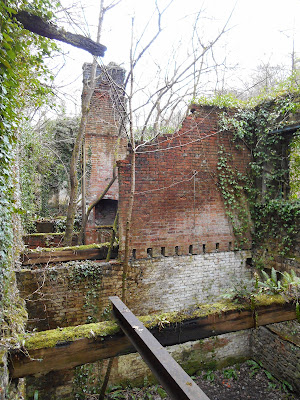 Inside one of the buildings, looking down from the first floor 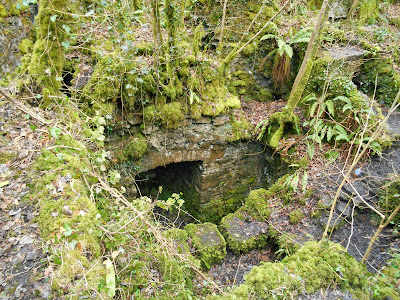 Nature has softened the edges over the last century 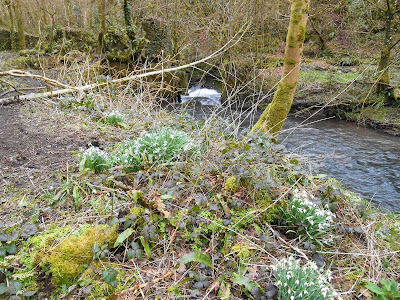 Mells Stream running to the south of the iron works provided the power to the works.  At this point it has been artificially narrowed, presumably to increase the speed of the flow and to create a bigger vertical drop. In early spring this is a lesser known Snowdrop Valley. 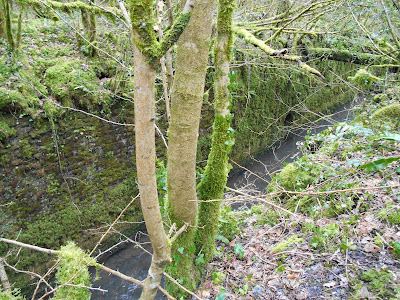 There were 9 water wheels operating at the Lower Works in its heyday.  None remain but I presume that this would have been the location for some of them, as the Mells Stream has been channelled between high stone built walls at this point.
Posted by St Kilda at 16:43