Winter's Tower or Combe Wood Lodge/Tower, as it is also known, was built in around 1750 for local landowner John Winter.  He lived at Watts House on the western edge of Bishops Lydeard.  This house is now Cedar Falls Health Farm and Spa.  His reasons for building the tower were to provide an "eyecatcher" to be seen from Watts House, to provide accommodation for his gamekeeper and also to enable him to spy on his neighbours, the Lethbridges of Sandhill Park, with whom he did not get along.

The tower, which is five storeys high, was constructed from the local sandstone and then rendered.  It was lived in until the early 20th century but was derelict by the 1930s.  It was restored in 1991 by a specialist builder from Burnham-on-Sea called Des Baker.  He re-rendered the walls and installed modern conveniences.  It was restored again in 2006 and the render was replaced with a breathable traditional lime based render. 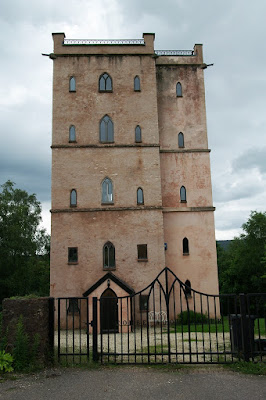 Combe Wood Tower
My thanks to Stan for allowing me to use his photograph.
Posted by St Kilda at 13:37