Prisons and Houses of Correction

Shepton Mallet House of Correction was built on the site of Cornhill House in the town c1625.   Houses of correction housed vagrants, beggars and petty criminals, who were made to do hard labour.  They were often called Bridewells after the first house of correction to open, which was located at Bridewell Palace in London. Over time they developed into prisons.  At this time the Somerset County Gaol was at Ilchester and there was another house of correction at Wilton in Taunton.

Shepton Mallet Prison was repaired in 1646 and enlarged/rebuilt in 1790 when the gate lodge and cottages at the back of the prison were purchased.  The buildings included accommodation for the Keeper, a magistrates' room, a chapel and a room for female prisoners.

The prison closed in 1930 but in 1938, as war loomed closer, part of the Public Record Office moved in with many of the nation's written treasures.  In 1940 the prison was occupied by the Royal Pioneer Corps.

In 1942 it was taken over by the US forces for use as a prison.  They built an execution block adjoining the main wings. Under the terms of the United States of America (Visiting Forces) Act 1942, which enabled American military justice to be enacted in Britain, 18 military executions were carried out by the US forces for murder, rape or both.  Thomas Pierrepoint and his nephew Albert Pierrepoint were the hangmen for most of the executions.

After the Second World War the prison was handed back to the British Army for use as a military prison.

In 1966 Shepton Mallet became a civilian prison again and the kitchen/chapel and factory blocks were built.  In 1973 it became a training prison.  In the 1980s it housed persistent offenders.  In 1991 it began to accept life sentence prisoners who were nearing the end of their sentences.  In 2001 it became a prison solely for lifers and it remained so until its closure on 28th March 2013.

Various plans were submitted and rejected for future uses for the prison, including hotel/bar/restaurant/housing/heritage centre or museum/gym/hotel/ghost tour. In 2014 Shepton Mallet Prison was sold to a company called City and Country.  Plans for flats were finally approved by Mendip District Council in January 2017. 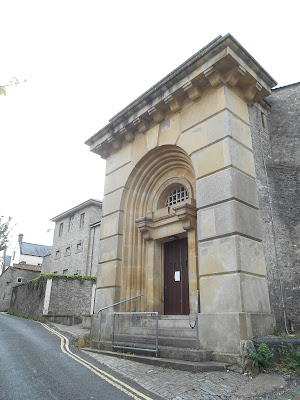 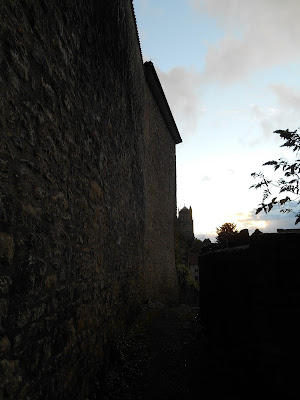 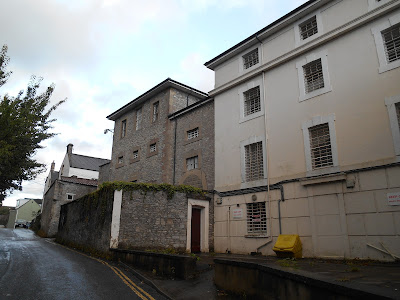 Shepton Mallet Prison from Cornhill
There was a gaol in Ilchester from c1166 on two different sites.  By 1615 the Gaol and House of Correction were located at a 3rd site at Northover on the north bank of the River Ivel.  26 cells were added in 1789.  By 1808 the gaol had a quadrangular plan with buildings arranged around courtyards.  Dayrooms were on the ground floor with sleeping accommodation on the first floor.  In addition to a male wing there was also a governor's house, chapel, female prison, debtors apartments, male infirmary, stable, cow house, carpenter's shop and conversation room.  By 1810 a building had been erected, which had a bakehouse on the ground floor and a laundry on the first floor.

Ilchester Gaol closed in 1843 when the County Gaol moved to Taunton.  The only remaining buildings are the bakehouse and laundry, which have been converted into cottages. 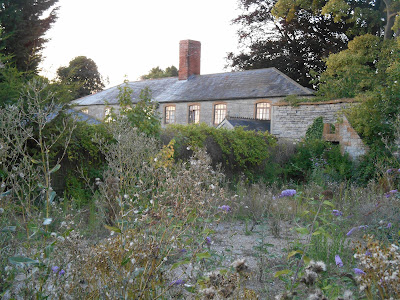 Taunton's first prison was in Taunton Castle.  It was used up until the time of the Monmouth Rebellion in 1685.  There was also a prison known as the Bredcage or Birdcage in the middle of the market by 1308.  When the Guildhall was built in 1467 two small prisons called the Cow House and the Little Ease were built underneath it.  These continued to be used until the Guildhall was demolished c1768.  A Bridewell or house of correction was built at the north end of North Street on the west side of the approach to the Tone Bridge c1597.

A replacement house of correction, known as Wilton Gaol was built c1755 on what is now Upper High Street.  It was enlarged in 1815 and 1843 and it became the County Gaol for Somerset in 1843 after the closure of Ilchester Gaol.

Wilton Gaol was built in a T-shape with a long three storey range and a higher polygonal tower.   The cross wing has been demolished but the long range and tower are still standing: they are located at the rear of Taunton Police Station on Upper High Street.

16 murderers were hanged at Wilton Gaol between 1844 and 1884. The executions were carried out on the prison roof in view of the public until 1867 and attracted large crowds.  In 1884 Wilton Gaol closed and Shepton Mallet Prison became the County Gaol.  Taunton Gaol was used as a military prison until 1889.  By 1910 the buildings were being used by the Territorial Army.  The current police station was built in 1943. 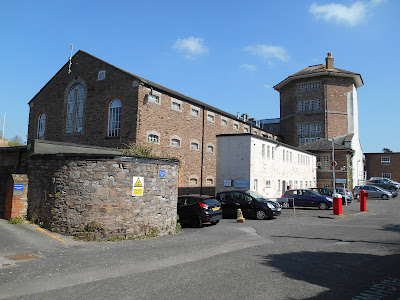 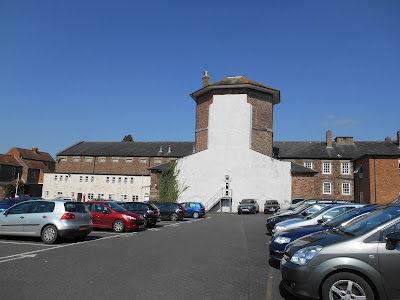 Wilton Gaol - presumably this is where another wing was once attached 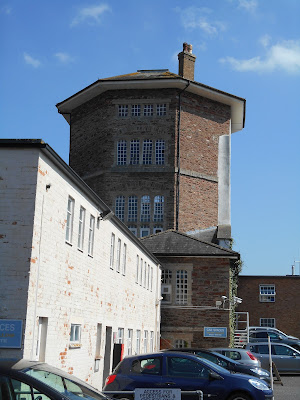 Polygonal Tower of Wilton Gaol
Posted by St Kilda at 12:36